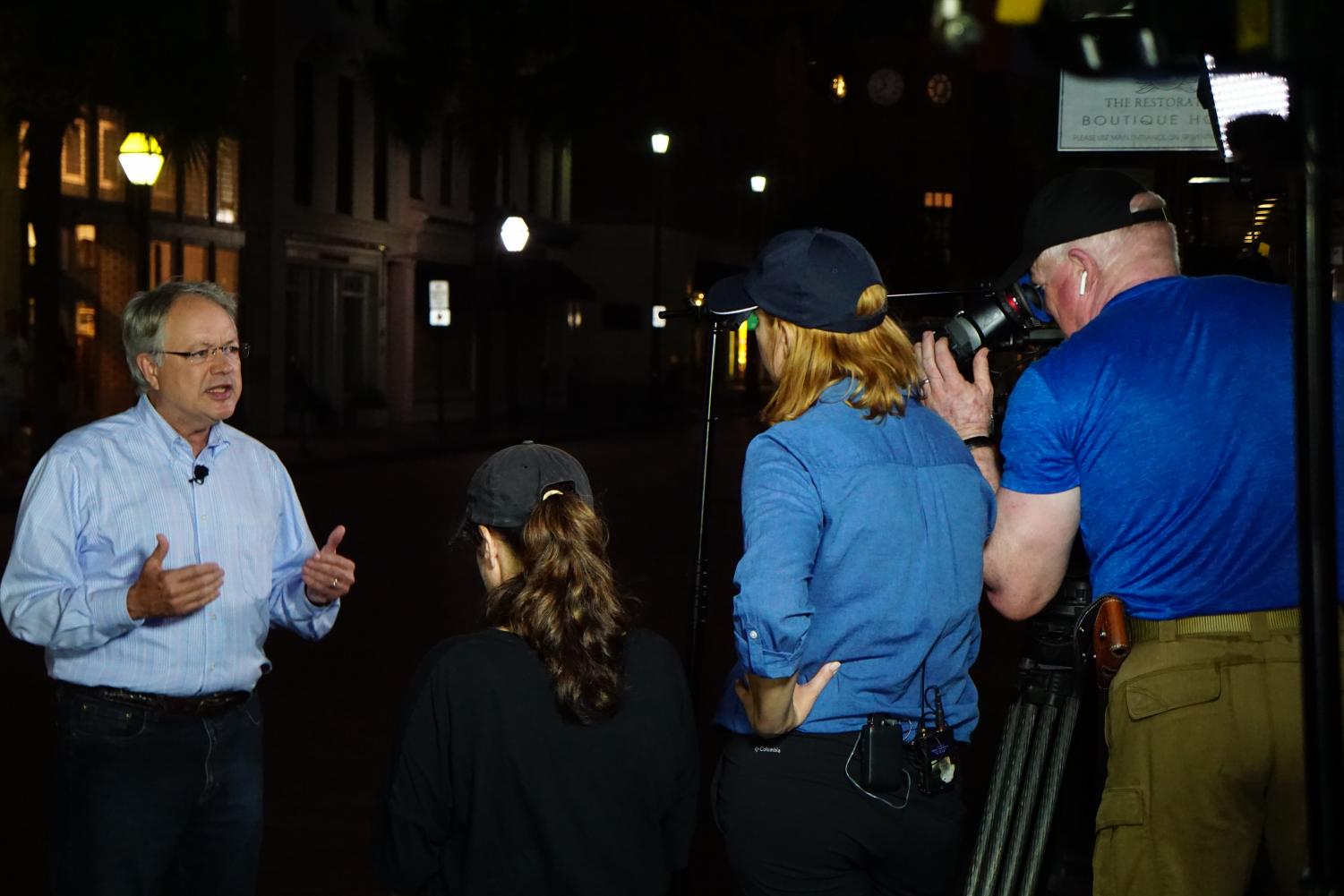 Mayor John Tecklenburg of Charleston interviews with The Weather Channel about Dorian’s arrival at the city. (Hana Donnelly)

Mayor John Tecklenburg of Charleston interviews with The Weather Channel about Dorian’s arrival at the city.

I’m still not sure if it’s because I’m a nostalgic picture-loving person or because of my three years on newspaper staff that makes me want to capture pictures of anything mildly interesting. Regardless, when Hurricane Dorian was soon to arrive in Charleston, I knew I had to capture it.

Apparently, The Weather Channel was on the same page when their journalists arrived in Charleston armed with large water-proofed cameras, rainwear and dedication to ride out the storm.

I knew they were live broadcasting from the sidewalk on King Street from watching T.V., and I also knew I had to go find them for some good pictures. I grabbed white-and-black spotted dog, Oreo, my camera and my parents (who wanted to be on T.V. mostly) and drove to find the fabled group of weather people.

We arrived at 6 o’clock on that Tuesday before the storm, at the same time Alex Wilson was broadcasting live, the cameras rolling and the bright light umbrella shining onto her. A sound guy waved hello.

King Street, on most days, is bopping. But on this day — Sept. 3 — the only people in sight were the broadcasters from The Weather Channel.

I’m going to be honest. That scared me.

The only positive was that Jim Cantore was not there. That meant the storm couldn’t be that bad.

Before I could truly grasp the impending hurricane approaching Charleston, the segment was over and my 15-pound rat terrier and I became the new topic to the journalists besides Dorian.

I was asked — multiple times — what college I was a journalism student at, and if I was in fact majoring in journalism. Then why I was taking pictures. Then what high school I went to.

Fortunately, I was not alone in my high school press endeavors. The same sound mixer said he too was on — and remembers fondly — his days on the high school publication. He recommended I continue down King while the crew took a break, forgetting to mention a particular guest who was expected to show up for the next broadcast.

I said my temporary goodbyes to the small army of journalists to continue my exploration of King Street’s sand-lined doors and plywooded windows. The buzzing of video drones bounced throughout the empty street.

When I returned to the film site on the way to the car, a small crowd had gathered in front of an armored truck. There stood Mayor John Tecklenburg of Charleston. I asked for a picture, of course.

There were 60 seconds until the camera was back on filming with the mayor. My new friend, the sound mixer, let me look through the recording camera’s viewfinder to find a good spot to stand while photographing the ordeal. The broadcast and my photography both started again.

I had my brush with weather fame. Fortunately, Hurricane Dorian didn’t make a big appearance in Charleston. At least my pictures did.