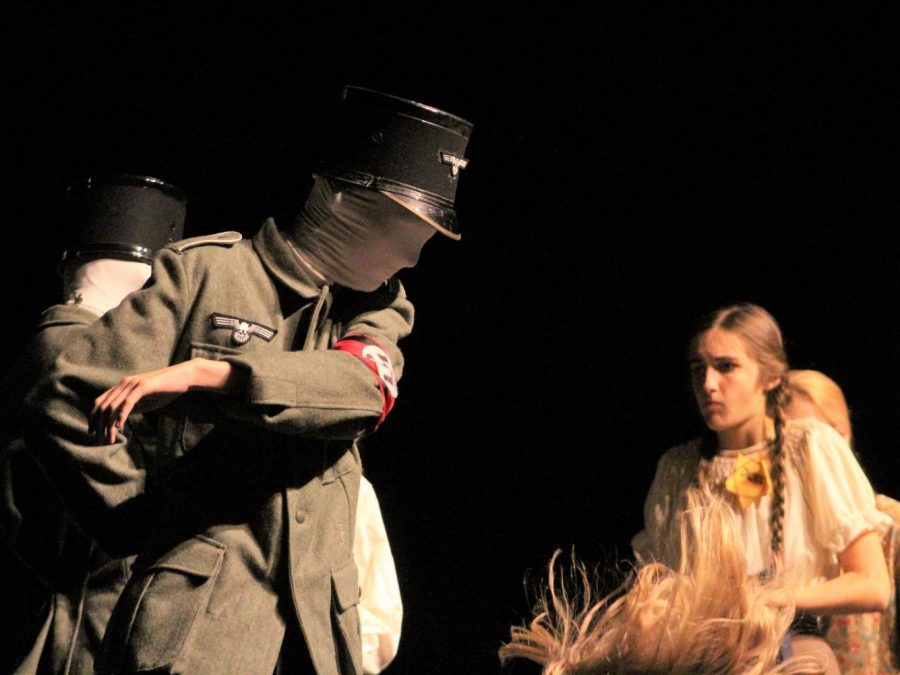 A bellowing voice fills the dark auditorium. The names of children are listed in a seemingly never ending succession. Some 16 years old. Some 12. Some even 9 and 10. All perished in Auschwitz. Killed by the unbearable, cruel conditions of the concentration camp.

Wando Theatre presented I Never Saw Another Butterfly Nov. 8, both as a matinee for students and in a 7 p.m. production. The play tells the tale of Raja Englanderova, played by senior Brooklyn Cantey, who is a young Jewish girl that survives living in the Terezin ghetto during World War II.

“This story is so meaningful especially because the characters are based off of real people…I get to take the story and turn it into real life, and it’s so much more exciting when you’re doing it with your best friends,” senior Riley Edenbeck said.

The play, written by Celeste Raspanti, is inspired by the book arranged by Hana Volavková, a Czechoslovakian art historian who survived WWII. The book is a compilation of art and poetry created by the Jewish children who lived in the Terezin ghetto. There have been productions of the play done by high school theater programs and professional performing arts centers all across the country.

This play isn’t like learning about the Holocaust in history class— hearing statistics, looking at pictures. The audience has a chance to connect with the children in the ghetto and see their hardships first hand.

“…you can really connect to these people because Raja leaves Terezin when she’s 15, so our age really and then Irena. You can see your mother in Irena no matter what. Honza is your best friend, maybe the guy you have a crush on,” Edenbeck said, “…these kids are kids just like us. They live in a different country. It’s in a different time period, but they are so similar to us.”

“This play has really brought a new perspective on the way I look at the Holocaust cause… with the play, we’ve done in depth research about… what happened specifically in Terezin,” Hall said.

The focal point of the stage was a clock tower, but instead of numbers, the clock was covered with the years 1939 through 1945, representing the beginning and end of WWII. Every time the clock would tick, Raja would transition from her flashbacks to the present day. One tick after another, the clock would turn and Raja found herself spending another miserable year in the ghetto.

“[The most difficult part has been] probably the character development of Raja because she’s going in and out of different time periods. It’s been difficult to figure out how I’m supposed to change as an actor, “ Cantey said.

Even though the children become more weak, starving, and lonely as the years go by, they never lose hope. When the children spent time in Irena’s classroom, they were beaming with smiles as they read stories and drew pictures. When Raja was with Honza, they were their happiest exchanging glances from across the camp and sharing the secret newspaper.

“I think the theme of hope is a really strong thing through the show because Raja is going through so many difficult things in her life, but she never really loses hope, and she keeps holding onto [the idea] that she will survive this and that her family and friends will survive this,” Cantey said.

“I hope to give them [the audience] a new perspective on like even when you’re in the darkest of times you can always look to friends to help guide your way,” Hall said.

The children weren’t the only representatives of life in a ghetto. The Nazis on stage brought the horror of the camps to life. By creative choice, director Ms. Destini  Fleming chose to cover all of the Nazis’ faces with white masks. Their masks created a sense of unity among their cruelty. The Nazis weren’t individuals with feelings and backstories; they were figures of violence and hatred.

Despite the brutal treatment by Nazis and loss of dear friends, the play follows through with its message of hope to the very last scene. As Raja looks back on the past and all of the relationships she made, each person comes to her side to support her through the sorrowful memories. They offer her messages of hope as they hang up hand drawn butterflies on the barbed wire fence in the ghetto.

Even though Raja has lost Irena and Honza, they will always be a part of her story.

“It [the play] made me teary eyed. It really got to me,” daughter of Holocaust survivors Reggie Guigi said to the audience.

For Adkins, the world today is just as cruel as is was during the Holocaust.

“I feel that I need to do this [speak out] because there is so much hatred and so much misery going on. This world right now to me is an upside down world, and I’m doing this to give the love that I have in my heart to other people,” she said. “I want everybody to be happy and have a good youth because I didn’t have a youth.”

Shirley Mills, the daughter of Holocaust survivors, had a simliar message for the students.

“I always asked my father, ‘How is it that you survived nine concentration camps losing everything,’ and he said ‘You have to find a reason to stay alive,’” Mills said, “We need to find a reason to stay alive and fight what’s going on in our world today so try to find that reason in your heart. You have it and you’re strong. Being afraid is okay, as we heard in the play, but you’re strong.”