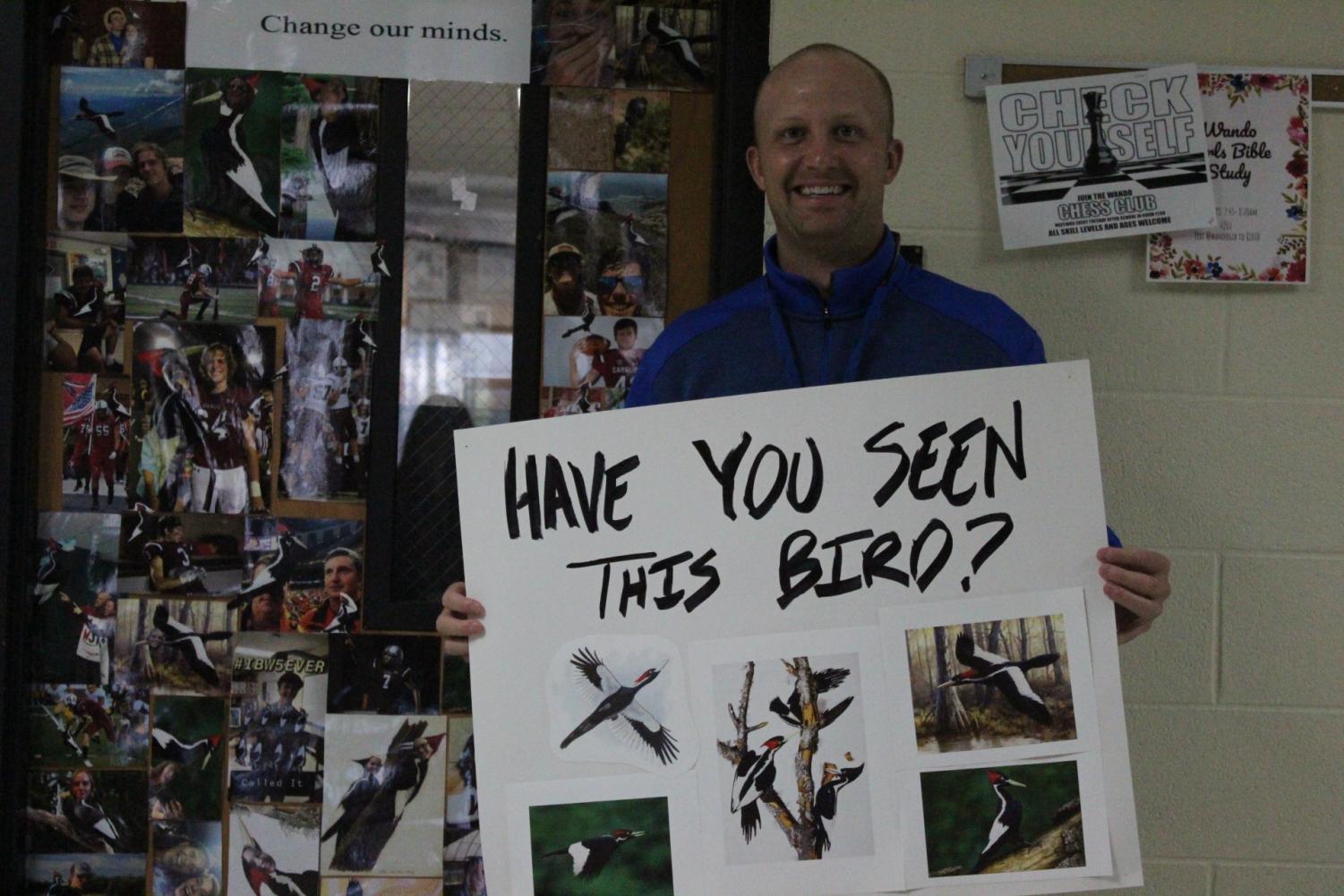 Coach Zach Neal brandishes his Ivory-Billed Woodpecker poster in front of his classroom.

Ivory-Billed Woodpecker Club created after the ‘rebirth’ of this species

Deep in the swamps of Louisiana lives a critically endangered species of bird thought to have gone extinct by many over 60 years ago.

Or, at least that’s what the members of the Ivory-Billed Woodpecker Club believe.

The club, founded and led by Wildlife Biology teacher Zach Neal, focuses on this particular, relatively obscure woodpecker, and each member is apparently adamant that it survives to this day — despite the fact that the last confirmed specimen died in the 1940s.

But the club isn’t delusional — in fact, quite the opposite. Even as recently as 2010, the Fish and Wildlife Service has shown interest in the bird’s possible recovery, and countless footage and audio clips have surfaced that suggest the bird is still very much alive, according to the Cornell Lab of Ornithology. Some of this has even been studied by professionals, but the task at hand remains to provide clear-cut evidence that the somewhat famous bird didn’t go the way of the dodo.

“The Big Thicket Preserve is a national park in Texas,” Coach Neal said, “And basically what happened was this guy thought he saw an ivory-billed there. So he believes he saw an ivory-billed, he reported it, and not overnight but very quickly, they preserved roughly three million acres of protected land.” To Neal, the bird means protection to habitat not just used by the ivory-billed woodpecker, but to other species as well.

Regardless of the lack of “definitive” evidence, the Ivory-Billed Woodpecker Club does more than just persist — it thrives. Last year, when the club was founded, its numbers grew to over 100 members. Of course, not all of these people are active, but a good 40 to 50 consistently attend meetings dedicated to the bird every week.

“I love the club because it’s, for one, it’s very fun, it’s very energetic. We’re usually all really pretty happy in there. I’ve never heard anyone come out of there saying they don’t like the club,” Riley Hudson, co-president of the club, said.

Every meeting usually consists of a quick story about a noted individual or sighting in reference to the ivory-billed woodpecker, and then quickly turned over to the club presidents, Tradd Byrd and Riley Hudson, an eccentric duo dedicated to making the club members feel welcome and accepted. Hiding under the mask of a critically endangered bird is a club all about having a good time.

“Kind of the big idea is to get people laughing, get people smiling,” Coach Neal said.

And it’s true, too. The Ivory-Billed Woodpecker Club is a way for students to chill, for a lack of better words.

“It’s a laid-back environment, where kids come, smile, hang out and enjoy each other’s company, meet a new friend and kinda have that little niche in Wando, you know?” Neal said. “Just a smaller place to smile and be around people in a sea of 4,000 kids.”

Entering the classroom is like stepping into a wildlife refuge. Pictures of native South Carolina wildlife species are on every desk, tanks for fish and turtles line the back wall and even a series of taxidermied animals watch the club meetings go down. A giant picture of the ivory-billed woodpecker currently lives on one of the whiteboards.
That’s because Coach Neal teaches other classes focusing on sustainability, such as environmental science. His naturally buoyant personality draws students in, too, and the club’s short meetings make it ideal for Wando kids that just want to have the fun that a club brings without any added stress.

“Coach Neal brings a good atmosphere to the kids that walk in there, and you know we always try to hype everybody up,” Riley said.

As you might expect with any kind of club focused on the preservation of woodpeckers, emphasis is put on sustainability and care for the environment. Members are encouraged to engage in projects such as building birdhouses for the Wando campus, or non school-related volunteer work like forest cleanup. In a nutshell, the idea of the ivory-billed woodpecker goes beyond just the one bird. To the club members, it extends to other areas of environmental sustainability and preservation.

“We live in the southeastern coastal plain,” Coach Neal said, “which is a biodiversity hotspot. It’s a place where we’ve got a huge arrangement of wildlife, and a lot of it’s going endangered or extinct at a quick rate, so a lot of the club is geared toward conservation.”

The woodpecker itself — while the club members believe it no longer lives in South Carolina — acts as an analogy for all wildlife, and why it should be protected.

“That’s the reason that bird is so important to me, the conservation aspect of it,” said Neal

The club usually meets Wednesday mornings, at 8:00 in room B-215, and lasts only 20 minutes. If you like smiles, that’s the place to go.