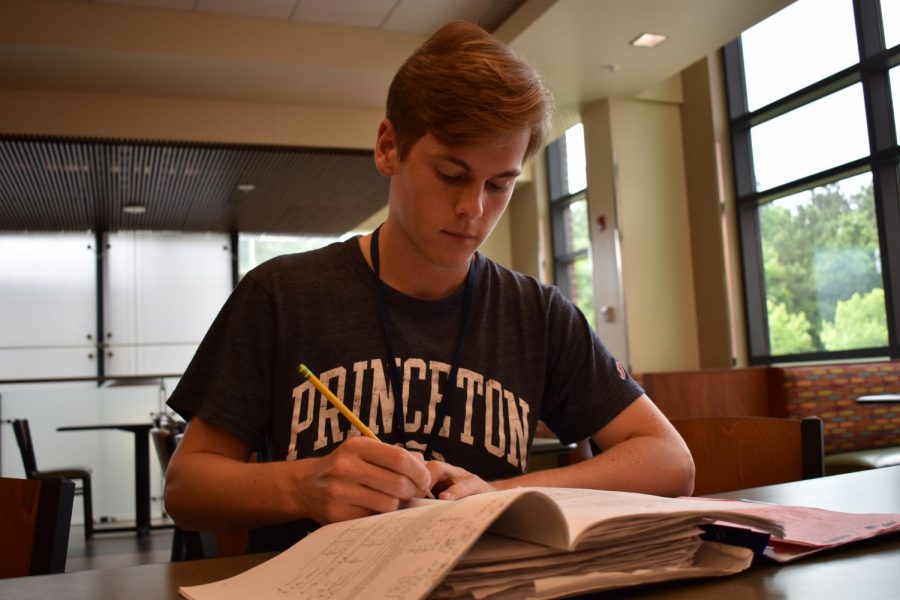 Jack Johnson prepares for his AP exams while sporting a shirt representing his future college.

Senior Jack Johnson’s academic career is characterized by hard work, and numerous AP classes. With his dedication and time management comes success, and even an admission to Princeton.

“The first time I ever got interested in [Princeton] was my dad and I watched the movie A Beautiful Mind,” Johnson said. “It’s about a mathematician named John Nash and he studied at Princeton… I kind of associated Princeton as like the mathematics place and I’m a math person.”

Johnson is following the path of economics and mathematics in a Princeton program called Operations Research and Financial Engineering.

Besides the Operations Research and Financial Engineering Program, Johnson has other ideas for groups he’d want to join at Princeton.

“They have a club at Princeton called Tiger Capital Management, which is an asset management club that they do,” he said. “So I’m going to join that and see if I enjoy it.”
When he was accepted, Johnson could only think how he managed to do it.

“I never thought I’d get in,” Johnson said. “There’s so many qualified people that didn’t get in.”
Besides his academic record, Johnson has also played tennis his four years at Wando as well as participating in jazz band.

“Last year was the first year that [boys’ tennis team] won the Lowerstate championship,” Johnson said. “My freshman year, we were a very young team so everybody has kind of gotten older and not a lot of people have left, so we generally have gotten to be a stronger team.”
Jazz band has been a part of Johnson’s life for a while now, and even has a part outside of school.

“Since sixth grade, most people start playing in sixth grade. That’s probably my major extracurricular thing. The past four years have been good…” he said. “I’m primarily a jazz musician and I have my own quintet, and we play, we haven’t played as much this year. But last year we performed for the Piccolo Spoleto festival.”

Johnson manages to juggle enough time for both tennis and jazz band as well as his academics.

“I don’t know, everything kind of works out…” he said. “Definitely there’s some scheduling conflicts with tennis and band when they are both going on.”