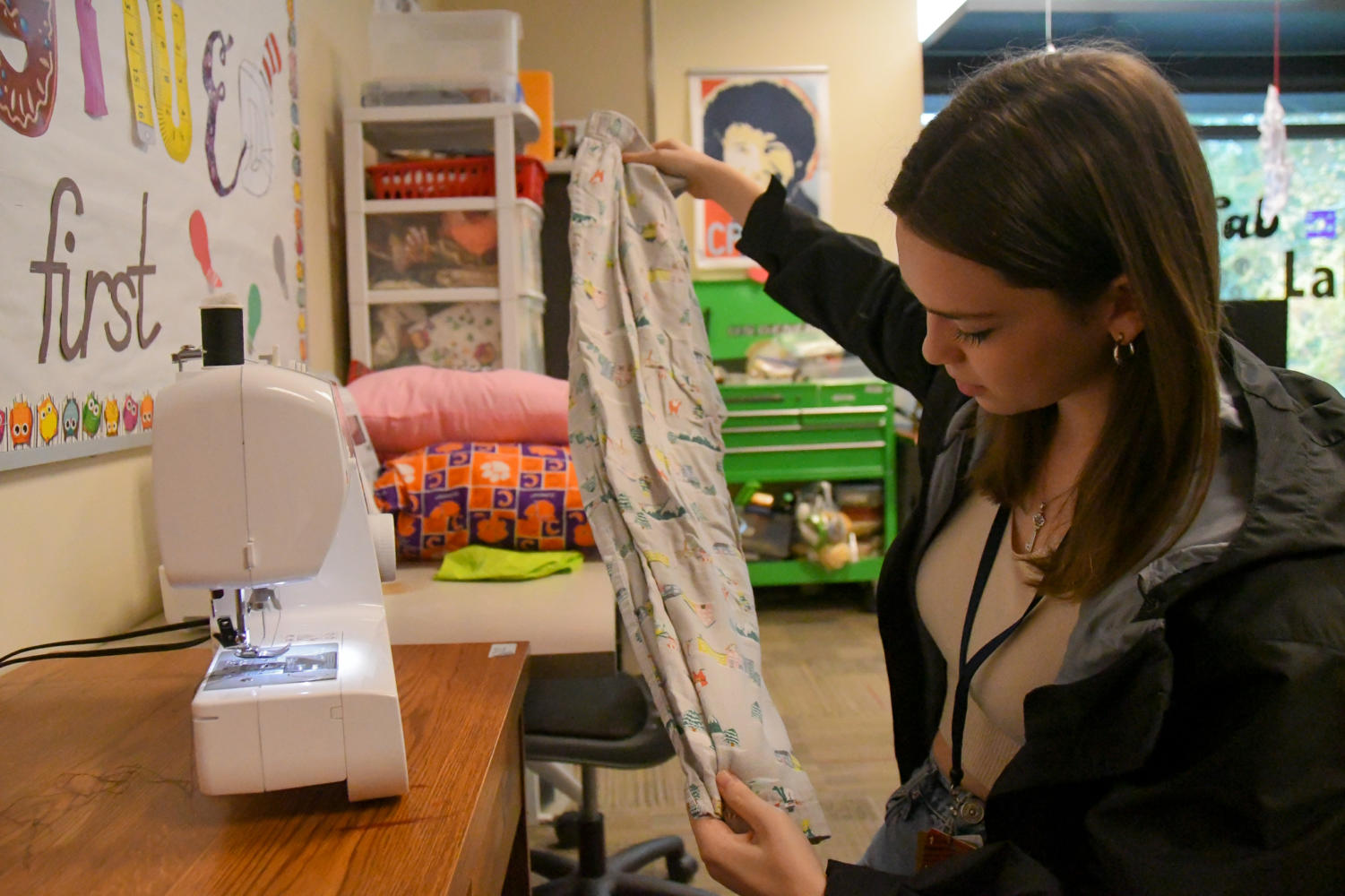 Junior kayley Mims inspects the pants after she has finished sewing any imperfections. She looks for minor cuts or details to fix up before donating them. (Ava Murphy)

Junior kayley Mims inspects the pants after she has finished sewing any imperfections. She looks for minor cuts or details to fix up before donating them.

Stitches of kindness and hope

Piles of clothes are scattered around the classroom as junior girls trade off sweatshirts and denim,  like children swapping candy to donate to local charities and organizations. This generosity goes to the heart of Kinder Club, an organization where students have the opportunity to donate to non-profit organizations just in their own classroom.

This club is fairly new to Wando, as it was founded in 2021 by four junior students who were sophomores at the time. The four founders, Jordan DeMario, Delanie Atkins, Alia Nawabi, and Kayley Mims all worked together to create the club and it’s name during their world history class.

“It formed when myself and the other club leaders… we were in history class… and we were talking about a club that we could do together that would be good for the community, but also be fun for the members too, and that’s how we came up with Kinder Club,” Mims said.

Elizabeth Ferrara was teaching the class when her students came up with the club. Thus, it felt right to ask her to sponsor their club.

“I think it has a great message of doing service for others because they always collect for people in need and so I think that’s a great thing,” Ferrara said.

Each founder contributed to the discovery process of the club. For Mims, she came up with the club name.

“The first idea that we had was just donating clothes, and then one of the other leaders said we should donate clothes to little kids. So I said “oh, you know we could call it Kinder club because Kinder is child in German,” Mims said.

To equally split the workload for the club, Mims has her own responsibilities to perform throughout the year.

“I get information out there, I set the dates for the clubs, and just try to keep everything as organized as possible and keep the members well-informed,” Mims said.

In Winter of 2021, the club heard about a flood of Afghan refugees coming to Charleston who struggled to find living resources. Although Kinder Club’s main purpose is to upcycle clothes for children, they felt it was needed to donate more. The founders asked the members to supply toiletries, toys, backpacks, books, shoes, and more items to help out. Accordingly, the members recruited friends, parents, and even teachers who bought new supplies and clothing to donate to the refugees.

“One of my proudest moments is when I walked into the meeting and saw everyone sorting clothes without having to be told. You know it just felt like they really wanted to be in this club and they wanted to help out,” Mims said.

Kinder Club makes it easy for students with a busy schedule by planning meetings only twice every month on Wednesdays after school. It may not seem efficient with a short amout of meetings, but the members of the club work efficiently together to get donations organized and sent out by their deadlines.

Every meeting, the girls gathered in room H-208 and organized the copious amounts of donations they received. Ferrara lended her room to store the trash bags, but it was certainly not enough. Members of the club, including junior Julia Olmo, completely took over the teacher workroom with the bags of donations.

After all of the clothes were separated, folded, and organized, the girls stuffed their cars with multiple bags and were on their way to go to the refugee´s house.

This year, the club is donating to two different associations which are the Ronald McDonald House and My Sister’s House. Kinder Club allows their members to conveniently aid the communities which both of these organizations give to.

“Our initial goal for Kinder Club was to donate clothes to children, but we kinda branched out this year and started donating to not only children, but also adults who need help too,” Mims said.

The Ronald McDonald House is a charity which helps families with ill children access medical help all across the world. As for My Sister’s House, it is their mission to break the cycle of domestic abuse for people of all ages in the Lowcountry.

“To be able to donate to different charities just at your school- it’s so easy. It’s just a great thing to do,” Olmo said.

By virtue of Kinder Club, communities in Charleston are able to attain the resources they need to live healthfully.

“Like I said before, just being a good person, it feels good to do that,” Olmo said.