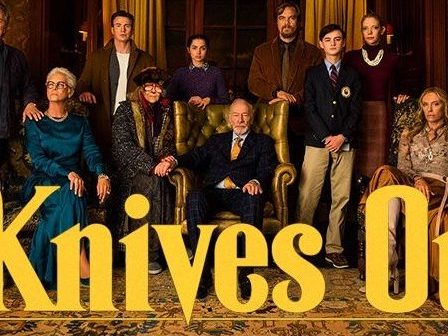 Have you ever wondered what it would be like to watch a real life Clue game? Look no further, because that is exactly what Riann Johnson did with his latest film, “Knives Out.”

But honestly, it kinda worked.

The film revolves around Harlan Thromby (Christopher Plummer), a wealthy author in his late 80s. He celebrates his birthday party and invites all of his family and closest friends. From the very beginning, it is obvious that nearly everyone of his family members is an entitled trust fund kid living off daddy’s money. The only character that is worth rooting for is his precious nurse, Marta (Ana de Armas).

If trying to figure out how Christopher Plummer is still acting at age 89 isn’t enough of a mystery for you, the movie throws in a steamy/spicey murder investigation. Harlan Thromby is suspiciously murdered after his birthday party. This is super weird because why would any of his spoiled, money hungry children, want to kill their loaded father? Just kidding! All of them have motives, like, I don’t know, maybe TO GET HIS INHERITANCE.

Adding to the tension, you have so many famous actors all at each others’ throats: Jamie Lee Curtis, Chris Evans and the BEST James Bond of them all, Daniel Craig, to name a few. How could anyone leave the theatre disappointed?

Basically, the movie is an elevated version of Hoodwinked — you know, the one with the overly-caffeinated squirrel and evil bunny rabbit? Yes, that’s the one. But when I say that, I mean it in the best way possible. Just like the fan-favorite Hoodwinked, “Knives Out” is the perfect balance of suspense and comedy.

This movie left me literally on the edge of my seat. I’m not joking I was actually the annoying girl in the theater sitting up in her chair, blocking everyone’s view and obnoxiously gasping at every plot twist. Sorry not sorry.