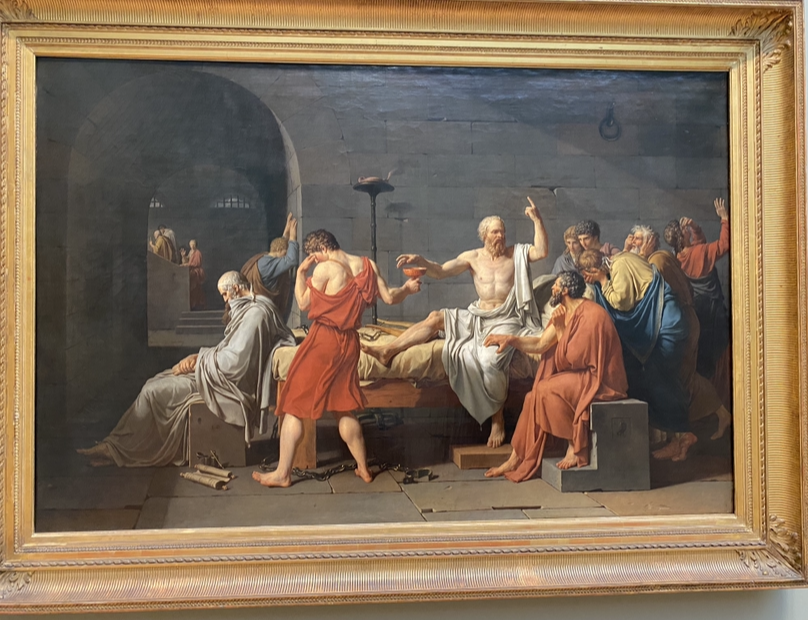 After being shoved around the crowded subway, walking through the bitter wind with a tear running through my tights, and my sensitive lived-in-South-Carolina-my-whole-life self standing in line in the New York cold, The Metropolitan Museum of Art seemed to be heaven as I first stepped in. Partly because it was heated and it didn’t stink of garbage and smoke.

Upon entry, my family first went to the Greek/Roman section. The section was huge and impressive, with every type of ancient world artifact I knew to exist. The most interesting part of that section was being able to see the exhibit “Chroma: Ancient Sculpture in Color”. Using a lot of fancy tests and tools (I’m not really smart enough to understand the process), art historians have been able to figure out the original colors that were on ancient sculptures and have used that process that they used to make painted copies. As known, most ancient sculptures were painted originally, and not the plain, but iconic white marble that is known today. The Chroma figures at The Met popped and caught the eye, probably the original function of the color. The colors on the sculptures were bright and wouldn’t be my first guess (or choice) as the original colors, but nevertheless it was interesting to see it as the creators saw it centuries ago.

The next big stop we made was in the Dutch art. I LOVE Dutch art, I love the soft lighting, I love the absurd amount of windows, I love the unfortunately aging women as subjects, everything about it brings me such joy. Particularly at The Met, the couple of Vermeers that were there. Shoutout to my mom for her influence in this, but Vermeer is my favorite artist. It’s possibly the nostalgia and partly how he portrays average scenes, specifically of women, so delicately and enrapturing. When I saw “Young Woman with a Water Pitcher”, I practically swooned, a dream moment right there.

Next was my obligatory time to accidentally lose my parents and get a bit lost, that happens every trip. I wandered through armory and instruments for a little bit until my mom’s ancient phone finally let the text message with her location go through.

After regrouping, we headed towards the Egyptian section. I had anticipated this section greatly and even wore an Ankh necklace for the art. The section was expressive and bigger than I expected, at this point I lost my parents again. The hallways were narrow and each room led into each other in a very unclear and confusing way. I got pretty claustrophobic pretty quickly. The most impressive part of the Egypt collection to me was one of the Hatshepsut statues. I had learned about this one specifically in my AP Art History class but seeing it in person, it was huge. I expected it to be 3x smaller than its actual size, so that was a nice surprise.

Upstairs was a lot to unpack. The European section from the years 1250-1800 had many paintings that I felt like I could stare at for hours. I was surprised to see “Death of Socrates” there, I didn’t know it was in the Met, and as I freaked out a little when I saw it, I let a little giggle out to my mom.

While I was pleasantly surprised at a good amount at The Met already, nothing compares to my surprise at the European Paintings from the 19-20th century collection. I was flabbergasted, taken aback, any other word used to describe shock by the amount of notable pieces that were there. The Monet paintings were beautiful, the Van Gogh’s were beautiful, everything was. I saw my two favorite artworks byEdgar Degas and two of my favorites from Pierre-Auguste Cot.

After spending a solid five hours there, my family finally left before we could get any more hangry. The Met was one of my best experiences and the collections were the most impressive I’ve seen so far.