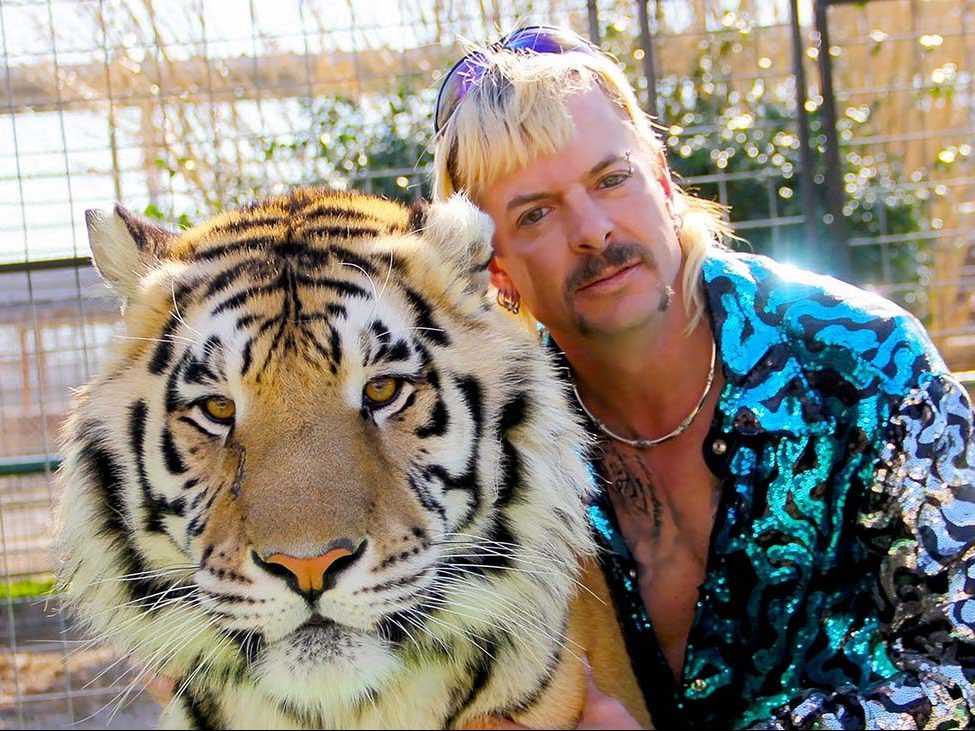 Visitors have lined up at the office of the The Greater Wynnewood Exotic Animal Park in Oklahoma. I’m sure they all had images of little, fuzzy baby tigers, white and orange, in their heads.

On that day, though, their visits were cut short.

An employee happened to have their arm bitten off by a tiger.

The owner, a blond-mulleted, self-professed redneck of the name Joe Exotic puts on his vintage EMS leather jacket before walking to the injured worker. To Exotic, appearances are everything.

I continued eating my rainbow-foil-wrapped Reese’s Cups in my hammock while Exotic explained to his guests that they would have to get rain checks for another day.

“The big cat people are back-stabbing, pieces of [explicative]” says former employee James Garretson, within the documentary-series’ first minute. A motif the rest of the documentary-turned-reality-TV revolves around as audiences are wheeled through the drama-filled life of private big cat ownership.

The main focus of Netflix’s Tiger King is the self-proclaimed tiger king Joe Exotic, and his eventual downfall from his gay, polyamorous, governor-running, meth-infused, misfit-run, underwear-line-producing and exotic-animal-owning kingdom.

Yet Joe isn’t even close to the biggest personality featured in the show.

There’s Mario Tabraue, a former drug dealer. There’s Doc Antle, a man who is said to have multiple girlfriends and to be running his Myrtle Beach T.I.G.E.R.S with sexual slave labor. And there’s Carole Baskin, who others claim killed her husband and fed him to her tigers to dispose of the body.

The people on Tiger King are really wilder than the animals they keep in captivity.

While the life of Joe Exotic is presented as a nonstop rush of crazy, there is an underlying tragic portion too.

Exotic’s former lover, Travis Maldonado, shot himself in the head in a gun accident. Exotic finds it suiting to create a memorial of Maldonado’s life with a decommissioned ATV. In his zoo. At the entrance. And this is after Exotic lip-syncs a song he (claims to have) recorded in front of teary-eyed grievers, once again, at the funeral hosted at the zoo.

Exotic’s lack of self awareness is so remarkably tragic it’s nearly painful to watch at moments. Yet precisely the inability to see his own flaws is what makes Exotic’s life so deeply engrossing.

While the show, produced by Eric Goode and Rebecca Chaiklin, presents itself as a documentary, it really cannot be classified as so. It is much more akin to a reality tv show. A reality tv show where you can’t really get into the drama because genuinely everyone is unlikable.

After all, each person is using the ownership of captive wild animals for some sort of personal gain. Whether that be scoring attractive young women, such as current G.W. Exotic Animal Park owner, Jeff Lowe, or T.I.G.E.R.S owner, Doc Antle are accused of; or Carole Baskin getting free care for her privately-owned animals, there’s really no one that’s “right.” All the millions of dollars earned by these people could, and — in my opinion — should, have gone to conservation efforts instead, as mentioned at the end of the series.

In the end it’s not hard to understand how Joe Exotic loses everything so epicly. His already struggling zoo is taken over by a fake-rich man. He becomes increasingly desperate. His final lashing out — his final chance at retaking the Tiger Kingdom — is his plan to kill his rival, Carole Baskin, with a $3,000 hit man. It gets intercepted.

Tiger King is certainly a jolting introduction to the world of private wildlife ownership. It definitely highlights the ingenuity required to be successful in the lifestyle, and the dire consequences of falling behind on it.

And again, while I loved Tiger King, I can’t exactly say I loved the tiger king: Joe Exotic. Or really anyone else.

Yet seeing how horribly dramatic the lives of big-cat owners are reassures my satisfaction with the things I already have. Especially since I, personally, would rather cut people out of my life than cut them up to feed to my tigers.