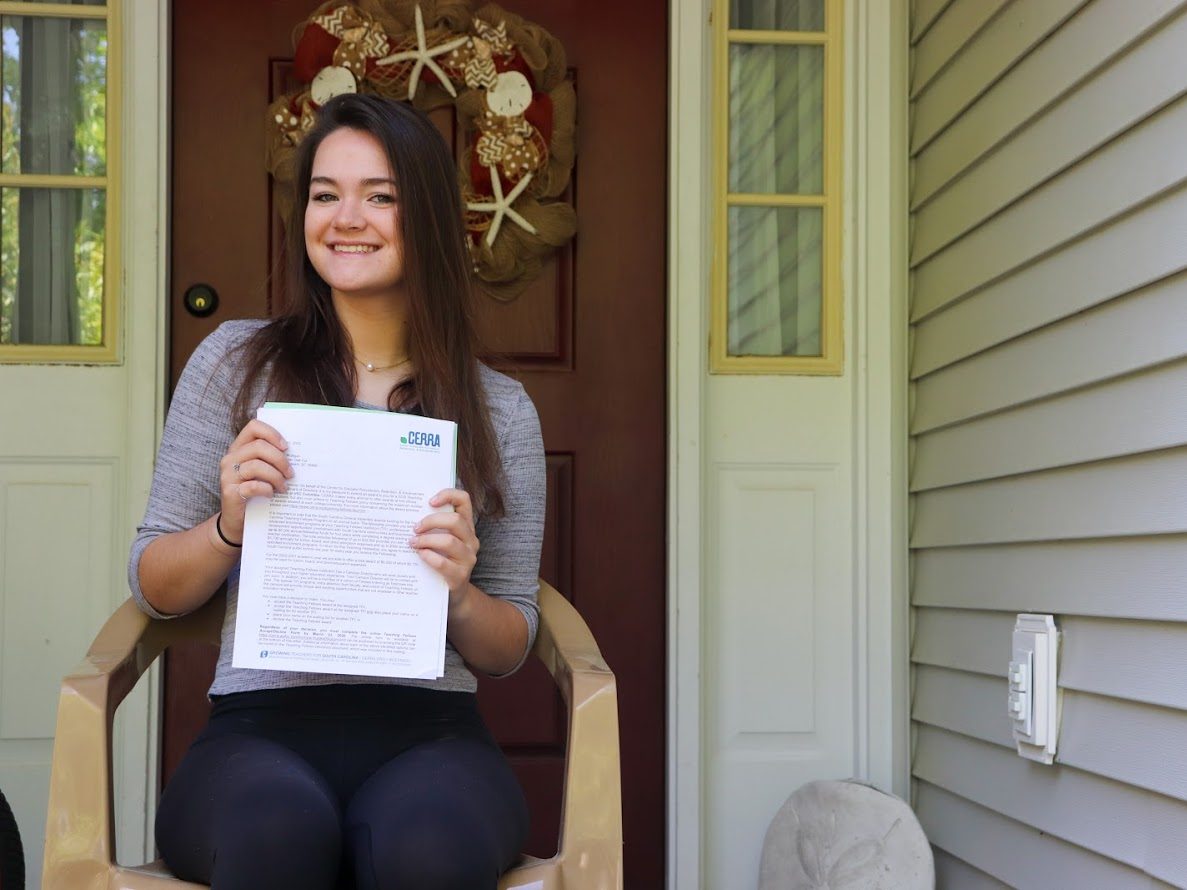 How did you hear about the teaching fellows program?

I heard of the teaching fellows program from my teaching cadet teacher Ms. [Angie] Byrd. I took Teacher Cadet 1 second semester of my junior year, and she was talking about it, mentioned it. She had a couple of former teacher cadets that were teaching fellows that came in and talked to us about it, so she made it pretty clear — she pushed for us to go for it if we were going to pursue a teaching career because it is a good scholarship to go for. It started out with her, and then junior year she sent out messages, like having us go to her if we were interested in it. She worked with us throughout the whole process, which is super nice of her. So it was kind of Ms.Byrd that helped all of us through the process and told us about the scholarship.

What was the application process for it?

The application basically — the first half was an online form, it was giving descriptions about yourself, extracurriculars, your involvement, your academics, service, stuff like that…teacher recommendations…It was kind of like a college recommendation. And then after that they cut out like half the applicants or something that… Basically they narrowed down the applicants and then you have to be selected for round two of the application process and that’s a formal interview, so I had to drive up to West Ashley High School…and do an actual interview. Basically it was a panel of three teaching professionals or people that work for the school district, people that work for CERRA, the company that helps fund the teaching fellows program. And so they interview you, they ask you lots of questions and there’s also a writing process, a writing portion of it, so they have you write an essay pertaining on the topic about teaching, then they interview you. Then you left and just waited to see if you got it.

You seem to be very passionate about teaching, is that true?

Yeah for sure. I wouldn’t go through that process if I wasn’t committed to the idea of teaching, especially because the scholarship kinda works more as a loan, but you pay it back by working in a South Carolina school for the four years that you received the scholarship to pay it back. So, if you do accept the scholarship it’s kind of like you’re accepting to go into teaching. So it is a big deal if you go after the scholarship and you do have to be committed to actually pursue a career in education.

Why do you want to be a teacher?

My mom’s a teacher, so I’ve kind of been around it my whole life. When I was younger, in like first grade, second grade, whenever they ask you what you want to do when you grow up, I’d always be like, ‘I wanna be like my teacher — whatever teacher I had that year’. And then as I got older I tried to go towards the more STEM stuff, because that’s where the money is, but it’s just hard when you don’t enjoy it as much and I just love being around kids and helping kids.They’re great people to be around.

What do you have to do for the program right now?

Well basically being a teaching fellow, on a collegiate level…when you’re selected to be a teaching fellow they actually place you at a college to be a teaching fellow, so I got placed at the University of South Carolina, so that’s about 30 other freshmen also got placed at University of South Carolina, so there are 30 freshmen teaching fellows at USC plus the upperclassmen there and if you are going to school in the fall that would be like meeting together, going on trips together, learning together and having like this gorgeous environment which is pretty cool to be apart of and that’s what I was really looking forward to. But right now it’s just getting emails from the  director and the USC — she’s being super supportive throughout all of this ‘cause we were supposed to have like a face to face meeting mid-June to sign paperwork and get to know everybody in the program, but that’s going virtual, so right now that’s where we are.

What did you do the moment you found out you got the scholarship?

What does being a part of this program mean to you?

It means a lot. It’s a really big deal. I’m honored to be part of the teaching fellows program. One of the highlights of my time in the teacher cadet program at Wando was  Dr. Eppelsheimer coming and talking to us about the hiring process at Wando and saying that one of the big parts of it is she does look for those like teaching fellows, or the people that stand out and that’s a big deal to get into good schools to teach because you can be a good teacher all you want, but if you don’t have a good environment, it’s kind of hard. So I’m very appreciative for that — to have that title, and then at the same having that cohort of other people that are committed to educating and being educators in general is awesome. The people, the professionals, being able to go on the trips with them hopefully if we go back to school in the fall. It’s an honor, it’s really cool. It means a lot.

What is a piece of advice you would give yourself when you were staring out this whole process?

This is basically advice to my sophomore year self. Freshmen and sophomore year I was big into more STEM stuff, engineering stuff and like I was good at it so I thought that I enjoyed it but I didn’t really…so I’d probably tell myself to take teacher cadets and embrace it. Don’t take it as ‘Oh this is just a fun class’ like really take your time and listen to what Ms. Byrd is saying and take it seriously because what you think you want to do is definitely gonna change and this is one of the big reasons why.

What is your biggest goal in life?

I know this is cheesy, but probably [impacting] peoples’ lives. It’s pretty cool if you want to go and be an educator because it’s not like other professions…you’re helping some child learn and grow and maybe one day, ten or twenty years down the line, they’ll be like ‘Oh I had Ms. Mulligan as a teacher and she was great.” That’d be pretty cool.

What are you going to miss most about high school?

I’m gonna miss the people. And also there were a lot of teachers that were really committed to teaching their subject, especially in the APs and the higher maths. They were awesome. They made learning so much easier ‘cause those were tough subjects and they were so kind. But also the people at Wando are great and everybody’s going everywhere and I’m gonna miss my friends a lot. There’s some great people here, especially at such a big school. You have huge opportunities to meet so many amazing people that I’m glad I didn’t miss out on.

What has been your biggest take away from applying and being a part of the teaching fellows program?

Just go for it. There’s no repercussions for going for it and you don’t get it, like just take that chance. I know it’s a lengthy process, but the worst that happens is you decline the scholarship. I hope that [the teacher cadets] apply for this and that they take education seriously because it’s pretty cool. It seems like a pretty rewarding thing that I’m excited to be a part of.

Why do you want to be a teacher?

My mom’s a teacher, so I’ve kind of been around it my whole life. When I was younger, whenever they ask you what you want to do when you grow up, I’d always be like, ‘I wanna be like my teacher’. And then as I got older I tried to go towards the more STEM stuff, because that’s where the money is, but it’s just hard when you don’t enjoy it as much and I just love being around kids and helping kids. They’re great people to be around.