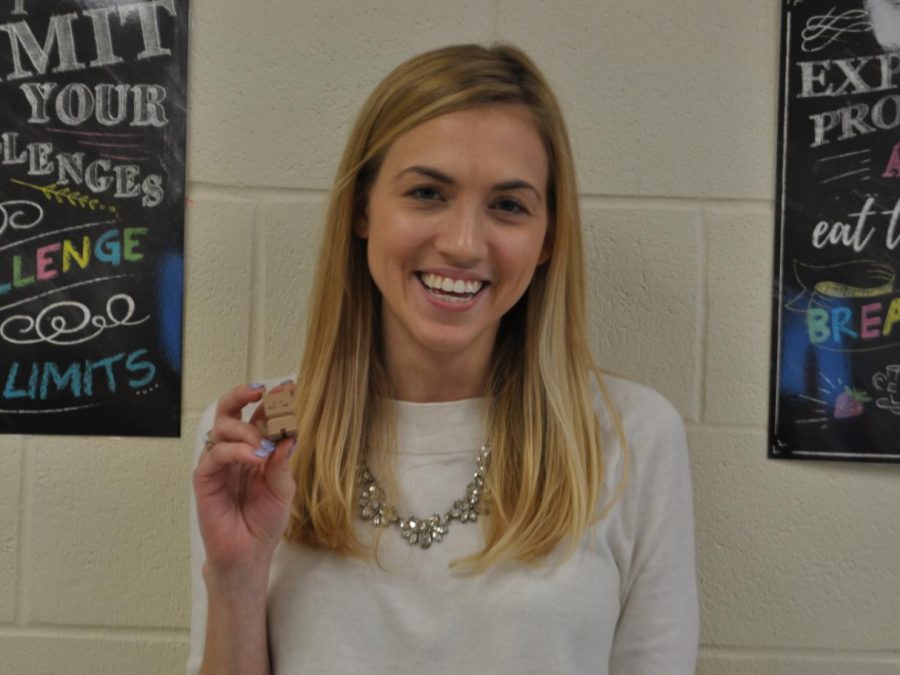 Where did you grow up?

“I grew up in Maryland on the eastern shore which is pretty cool, and it’s an hour and a half away from Washington D.C. It’s just a small town, lots of farms, and there was water.”

Did a lot of your family live there?

“Actually, yes. My grandfather has a farm and they have soybeans and corn and my grandmother …she has a little garden that they have there and she grows green beans and cucumbers and tomatoes. Whatever time of year it is, she always uses one of her vegetables in the food that she makes.”

What is one random memory you have of your childhood?

“One time, my dad was like ‘Hey, I’d like you to learn how to garden.’ So, he let me start a little garden at the farm, and I planted my stuff, I watered it, I took great care of it and my dad one time just watered everything, like out of control, and all the plants died. And my mother was so upset with him. She was like ‘She started this garden and you just killed it.’ She told him ‘Go out to Walmart and get a bunch of pre-grown plants and put them where she had hers planted  so she’ll think that her plants are doing fine.’ My dad did that and all of those died too, so I found out and had no vegetables that year.”

Where did you go to university?

“University of Maryland, right outside of D.C… It’s more urban than where I grew up, so it was different for me, and I majored in math. I did not enjoy doing math in college, it was really hard… so I didn’t really like math in college, but I had a lot of fun and met a lot of great friends.”

Do you have your master’s degree?

“Yes, I got my Bachelor’s in math, just math, no education, and then my masters is in secondary math education. My master’s year was the worst. It was all one year so I had student teaching and actual classes that I had to go to… it was from August to June. Most master’s programs are like two years long. This was one year, so it was like from 7:30 to 3:30 you’re at school teaching full time and then I had classes from 5 to 8:30 each night with projects that went along with those. That year was probably the worst year of my life. It was probably because I just didn’t have a life, like my friends all had fun things going on and I was either at school, in class or at home.”

How would you describe teaching now?

“When I first started, the first couple of months, it was really hard when I was student teaching because I was trying to balance all that work with my master’s work. I think that teaching is one of the funnest jobs you can have, just not in August and not in May. August is crazy because everyone is going back to school, no one knows what to do in a school, ‘I forgot how to behave,’ that type of thing, and then the same thing happens in May. Everyone is checked out… so between September and April, it’s a lot of fun.”

What was one extracurricular you enjoyed in college?

“I got really involved with this club called CREW, a Christian ministry, and I led my own Bible study and I was their event planner for a while.”

What are some of your favorite things to do outside of school?

“This is gonna sound so cliche. I really like hanging out with my friends. I like going places with them, like going to the beach or during our hurrication we went out to Greenville for a week. We go out and get coffee or dinner… In the summer, my friends and I like to do a lot of corny stuff like mini golfing on the weekends at Charleston Fun Park.”

What other hobbies do you have?

“I really don’t do a lot of hobbies during the school year because I’m so busy with other stuff, grading and everything else. I’m really good at painting, I’m good at calligraphy on canvases , that’s something I do for fun. I like traveling, family, all that fun stuff.”

Have you ever gone out of the country?
“I’ve been to Europe a few times, not just with my family. When I was in high school, I was really interested in people who didn’t live in America. So, I… got these pen pals and the rule was that you could only physical, handwritten, paper letters, and so I had a group of girls all over the world who I used to send letters to on a regular basis. My closest one, she lived in Germany, and so I learned German and I went to go visit her one summer.”

Where are the best places to get coffee?

“For lunch and dinner, I really like Taco Boy. They have wonderful things and it’s kind of like hole-in-the-wall too, even though everyone knows about it.”

Do you have any favorite pet stories?

“This sounds really awful, but I’m not really an animal person. Like I don’t hate them, but I don’t have a pet right now.. Two times actually, Ms. Maritch asked me to watch her cat and the cat just misbehaved the whole time. Here’s a funny story about Ms. Maritch’s cat, I was watching her…and it was right before Christmas, so I was like ‘We are going to decorate our Christmas tree together.’ We made cookies together, we watched a few Christmas movies together, and I took all these pictures and sent them to Ms. Maritch.”