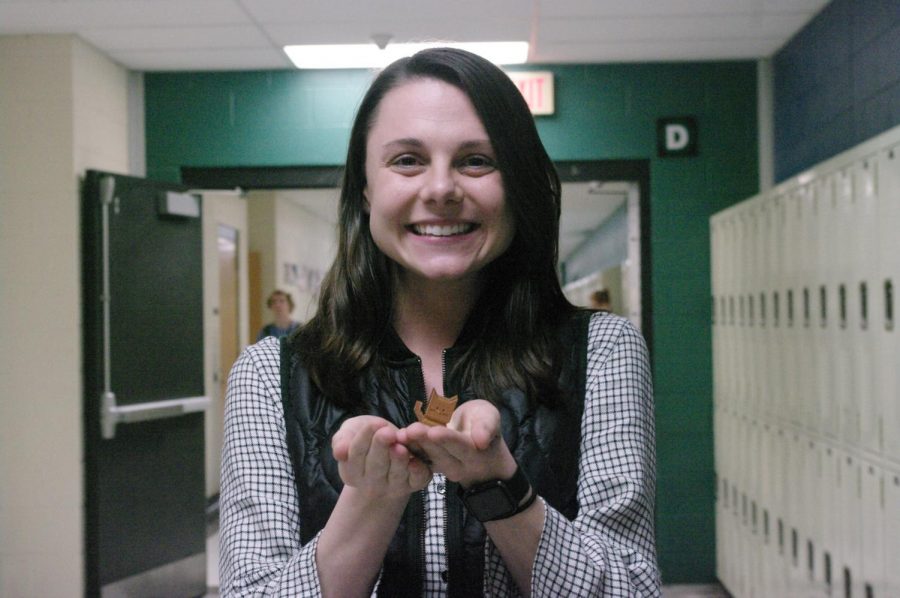 What hobbies do you have outside of school?

Outside of teaching I like to read especially, thrillers, and podcasts about murder mysteries and of course educational podcasts as well. Then spending time with my cat and my fiance.

What’s your most intense memory?

I would say the day my fiance proposed to me the day before Pi Day of this year would be memorable. Another thing I would say is when my brother texted me that my great aunt died and I got it on my apple watch during class. That was pretty traumatizing. It’s a bit heavy, but I would say getting engaged.

What is your family like? What’s one of your favorite moments with them?

I have a brother and a sister who are both 21. I would say one of my favorite moments with my sister was this past spring break. She came down from her spring break from college, so she’s old enough now to be able to drive the 600 miles from Pennsylvania to come visit, and she was able to spend a week with my fiance and I over spring break. We’re pretty close, so we got to go out to the beach and restaurants and I got to show her Charleston.

If you could describe your childhood in three moments, what would you say?

Okay so in my childhood I cut my cat’s tail off by accident. I was chasing after it in a glass screen door and it was traumatizing.  I said that I hurt my best friend but the point is, is that the cat is my best friend and that I was very concerned and empathetic and empathic child.

Uh kinda klutzy is telling about me. I guess a defining moment from my childhood was when I became a big sister. I was an only child until I was 7, and my parents told me because I couldn’t pick between a boy or a girl, I got both, and that was an adjustment. I really took that role of being an older sibling and ran with it, which I think is why I am so passionate  about teaching because I’ve played that leader role for my siblings since I was 7.

If you could reconnect with one person from your childhood, who would you choose to see again? Why?

I would say my middle school best friend, her name was Michelle. I went through middle and elematary school with her. She was actually with me when I met my fiance at Dorney Park, which is the equivalent to CaroWinds in Pennsylvania. We went to all the middle