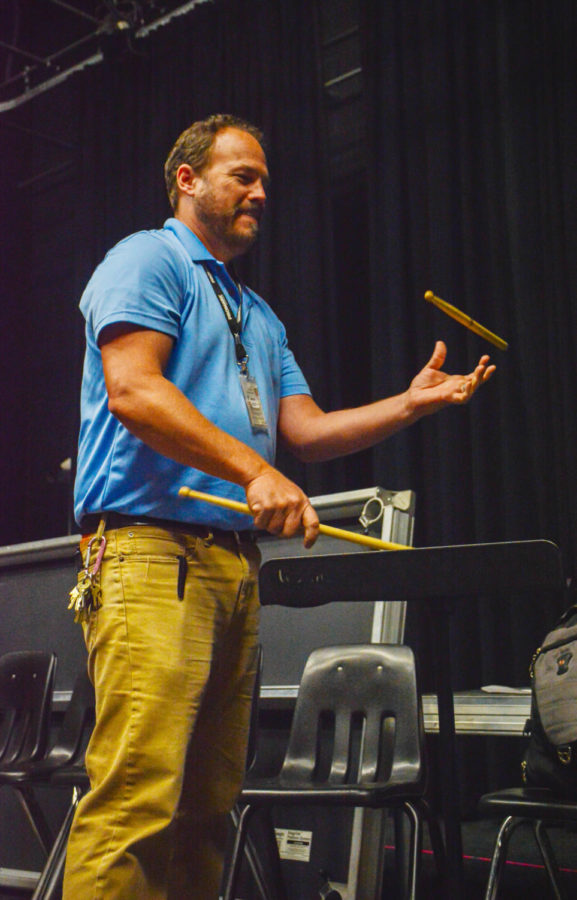 Being a long time teacher at Wando, what motivates you to teach everyday?

What motivates me to teach everyday… I think it’s mainly the growth in students, getting to see both short term and long term improvement in kids. Especially in the classes I teach, you see the same kids for four years. So the ability to see seniors now playing at a way higher level than they were freshman, and also seeing freshmen playing at a way higher level than 3 months ago. That’s probably the biggest motivating factor that pushes me, that makes me excited, and I think it’s sometimes geared towards individual playing that is usually seen through performance. Like through performing as an ensemble, so you see the ensemble piece improving as a result of the individuals.

What did you do prior to teaching at Wando?

Prior to teaching at Wando, I was in a touring brass quintet called the Dallas Brass, where I was the drummer, and we toured the year before I came to Wando. We were on the road 175 days that year. We did mostly about 100 concerts a year, all in the US and abroad. But, it was 100 concerts, and every place we did a concert we would also do some type of clinic with high school and middle school kids. So I was basically living out of a suitcase in different hotel rooms. I was in a hotel, or probably a motel, somewhere in the middle of Iowa, and I got a call from the former percussion guy, and he asked me if I wanted to unpack my bags and start teaching here at Wando. And I’d been doing private lessons and little clinics prior to that, so when he told me that the job was opening and he wanted me to apply, it was a no brainer.

What is one thing you believe defines the way you teach?

I think one of the ways that defines the way I teach, I try and be caring towards students, I try and have fun. I never like to do something just because you are supposed to do it. I like there to be a reasoning behind it, I do like to have fun, I like for the atmosphere to be lighthearted, because I feel like it always was for me. I learn better in that environment, and I think some of the kids do here as well. I’m generally light hearted until you get on my bad side or do anything dumb. If you do somethng really dumb then the mean side of me comes out. I think it’s that. I like to joke. I think I’m more sarcastic than I should be. I had this former student that accused me of being passive aggressive, and I probably responded with some passive aggressive response to that, and then I realized that she was probably right. But, I don’t know, I like working with the kids, I love it when they leave and do wonderful things and come back.

How has your experience been coming to school after your injury/incident?

It’s tough. I feel that everything is the same but so much of it is different for me, both in how I approach things, and my willingness to let go of some things. Just because that was such a powerful moment for me and my family, and to see things so close to being gone, it made me reevaluate some things in life. It was definitely hard at first, putting in the time after that. There’s still days that are hard. I went through trauma therapy. There’s parts of it where I think my values are in a different spot than they used to be. I’d say in a good way for me and my family, but maybe not in as good way for the program as a whole. And I’m okay with that.