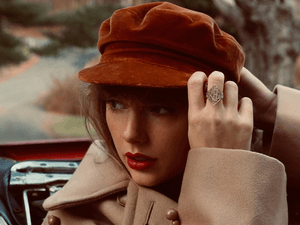 After months of speculation and strung-out theories about the order of releases, Taylor Swift has finally released her version of Red.

After having time to sit with the album and gather my thoughts, I really have only one thing to say: I hate Jake Gyllenhaal.

Instead of listening to the album start to finish, I went backwards, kicking off my morning with “All Too Well (10 Minute Version)”. This song really solidified my feelings towards Mr. Gyllenhaal. “All Too Well” has always been one of my favorite Taylor Swift songs, and having an extra five minutes of pure genius sparked something inside of me. Though the ten minutes was full of raw emotion and vulnerability, I do feel like it ran a tad bit long. The last minute or so is just a fade out and repetition of lyrics. I understand the artistic choices and her wanting to get it to ten minutes, I just feel as though she could have cut it off a bit sooner.

From there, my listening got sporadic. I kept the same man-hating vibe and listened to “Better Man”. I truly believe this is one of the best on the album. Having previously sold this song to Little Big Town, Taylor had only done a couple covers of it. Hearing the studio version of this god-tier song was icing on the cake. My sincerest apologies to Little Big Town as I will probably never listen to their version again, I hope they can understand.

“The Very First Night” changes the album’s vibe completely. The upbeat lovey-dovey song makes me want to dance my heart out. Plus, the speculations of this being about Harry Styles doesn’t hurt. I think if Taylor had included this on the original release of Red, it would have been a major hit. Considering the popular songs of the time like “Call Me Maybe” by Carly Rae Jepson, I think this song could have done very well. It just makes you want to bust a move and fall in love.

I do have to say, I prefer the original version of “Holy Ground”. Of course I will only be listening to Taylor’s Version, but I feel like the original recording was more upbeat and maybe faster? “Holy Ground” is one of my favorites off the album so it was hard not to love, but she made up for it with the other Vault songs.

“Nothing New” featuring Phoebe Bridgers in my opinion is one of Taylor Swift’s best collaborations. Taylor and Phoebe’s voices mesh well together and are very complimentary. The song itself is heartbreakingly beautiful, something I think is very on brand for both artists. The lyrics are so relatable, as most of their songs are, but especially the lines about watching time move and not knowing what to do with yourself at different stages in life. Real tear-jerker there.

Though Red (Taylor’s Version) is classified as a pop album, Taylor acknowledges her country roots in “I Bet You Think About Me” featuring Chris Stapleton. This song reminds me a lot of “Betty” from folklore due to the instrumentals and the buildup, which isanother great song by the way. Unlike the feature of Phoebe Bridgers, Chris Stapleton stays mainly on background vocals. But, I think this works well for the song, giving it more of a country feel. The rasp in his voice combined with Taylor’s exaggerated country accent couldn’t be better. My favorite part of this song is the ending, where Taylor essentially mocks her ex-boyfriends who talk about her writing about them.

“Message In A Bottle” is very similar to “The Very First Night” in the sense of making you want to get up and bust a move. I think adding more upbeat love songs like this helps to balance out the album and make it feel less bitter and depressing. Like “The Very First Night”, I think it could’ve done well if she had included it on the original release. It makes me very nostalgic.

Red (Taylor’s Version) blew me away, not just because of the Vault Songs and the new gossip on Jake Gyllenhaal, but just hearing the difference in how much her voice has matured throughout the years. It was interesting to see the parallels between her unreleased lyrics to Red and the lyrics of some of her newer songs. It was fun to pick up on the connections. The vulnerability in all of her lyrics is something that Taylor has kept through all of her albums, never being afraid to show her true feelings.

But with all that being said, I do hate Mr. Gyllenhaal and he needs to learn how to show up at birthday parties and return that scarf.