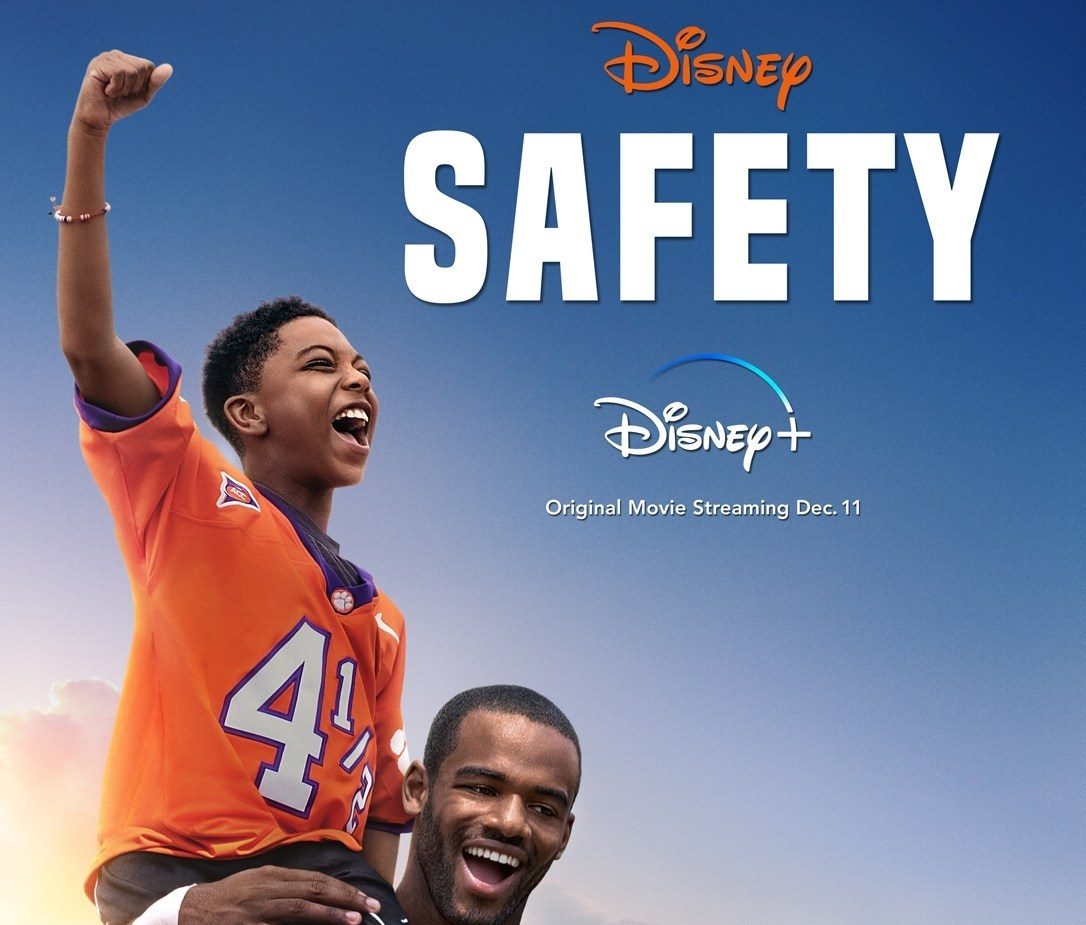 “Safety” is a washed out take on the college football dream

A young boy who is ripped away from his drug-abusing mother. His older brother who has to care for him — all the while juggling a girlfriend, college and a future in football. A coming of age story where reams and hard work are in danger of being destroyed at the hands of misplaced responsibility. And, most appalling of all; a movie so heartfelt, I have never laughed harder (and no, not in a good way).

In 2020, director Reginald Hudlin released Safety on Disney Plus. Based on a true story, Safety tells of older brother Ray McElrathbey -portrayed by Jay Reeves — harboring his 11-year-old sibling Fahmarr at his dorm room after their mother’s drug-fueled absence. This being prohibited on Clemson’s campus, Ray must keep up with classes, relationships, and Fahmarrs education/wellbeing while avoiding any unwanted attention from his coaches. Already, it’s safe to say that this plotline alone is enough to create an Oscar-winning masterpiece.

Unfortunately, therein lies the movie’s main problem: wasted potential. Instead of focusing on these genuine, heartfelt moments — scenes of pure love between two brothers — Hudlin made the mind-boggling move of focusing the spotlight not on Rays’ struggles with his mother, slipping grades, or even that of his own brother. Instead, Safety looks at Ray’s football practice. Struggles of his brother running away are shoehorned into a 2-minute plotline to make room for “the big game.” Football warm ups and practices take the spotlight, while Ray’s mother — fighting her addiction to drugs — is given less than 10 minutes of screentime. 10 minutes out of a whole 2 hour movie.

And, if you thought harboring a younger brother, scheduling around football practice, slipping grades and the loss of both parents wasn’t enough to weigh a college student down, Safety manages to shoehorn in issues of relationship drama in this smorgasbord of conflicts. What I’m talking about of course, is Ray’s girlfriend, Kaycee. When she’s throwing out random sports terms in a desperate attempt to seem quirky, her main purpose is to pull the plot away from Fahmarr’s depression, Ray’s family, or literally anything that would have been more interesting. Once you hear the fifth random football statistic that came out of her mouth, it really makes you wonder why the writers included her at all. Since if you didn’t already know, she was never a part of the actual story.

Looking past the many B-plot characters and unnecessary plot lines, I began to see what Safety truly boiled down to: a Clemson University advertisement. When you see that orange paw, frame after frame, this becomes clearer by the minute. Or, when Ray’s head coach talks about how “our tradition here is unlike any other,” you really start to wonder when we can get back to the main plot. Obviously, Ray’s story was mainly on Clemson’s campus. I’ll bet, though, that even he didn’t have to hear countless speeches about the Clemson Tigers being unlike any other “family.

That’s not to say that Safety never had its moments. The tears streaming down Ray’s face when he had to take custody of Fahmarr from his own mother had my eyes watered up as well. The photography, whether it was first-person shots of practicing on the field or the waning camera falling with Ray as he plopped on his dorm bed, as a viewer, I could almost feel the physical turmoil of football practice.

Unfortunately, even that’s not enough to save Safety’s reputation. At the end of the day, it will go down in cinema history as yet another Hallmark football movie, right alongside Remember the Titans and Rudy. Who knows, maybe the kids in Freshman Focus will enjoy it more than most.