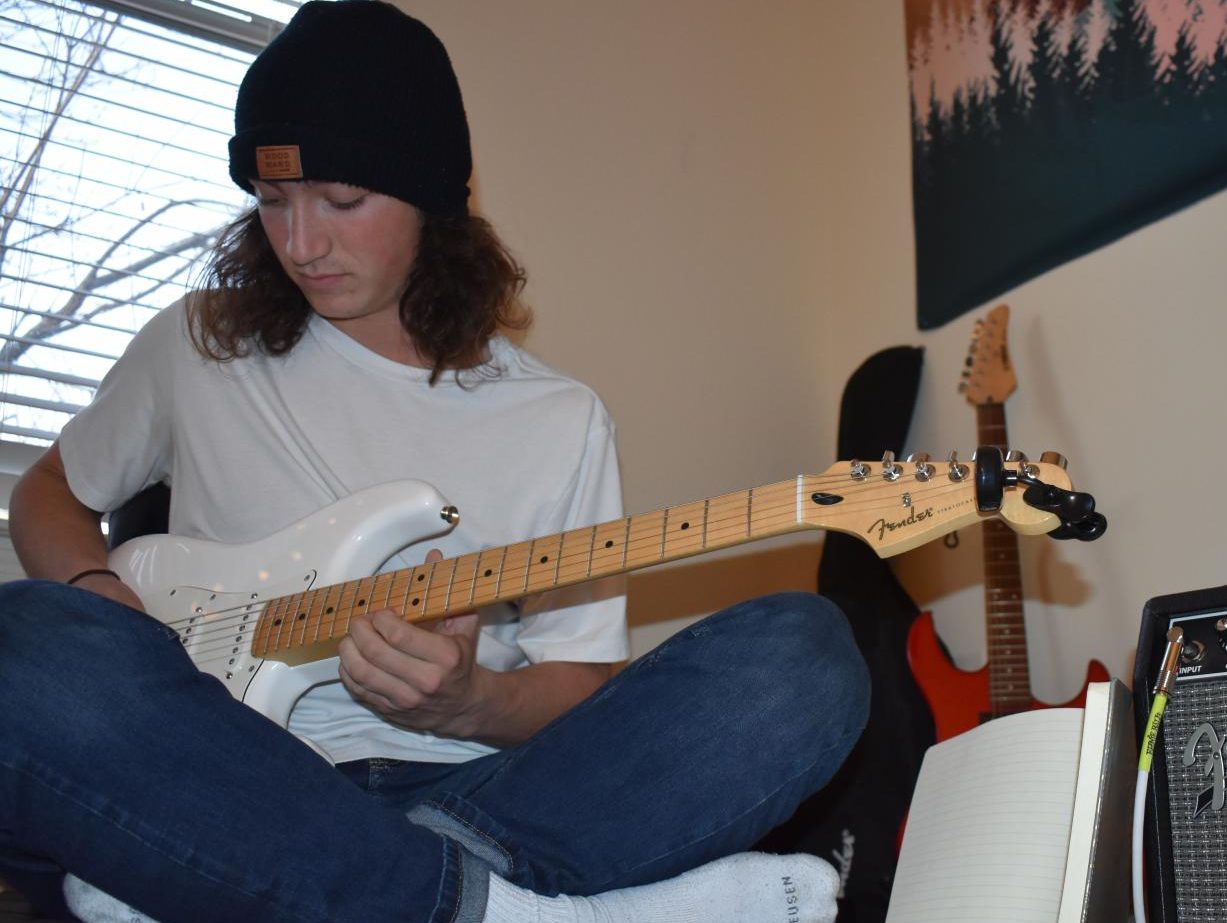 Marguglio typically plays his white Fender electric guitar in his room and has a setup with lights and an amplifier to enhance the song that is played. (Hannah Flint)

Marguglio typically plays his white Fender electric guitar in his room and has a setup with lights and an amplifier to enhance the song that is played.

Sailing through the tunes

The blair of the music. The sound of the show. Most people despise it. They find it noisy, chaotic, out-of-place.

It started with your classic case of too-much-time. Liam, on a boring winter night was stuck inside his house, just yearning for something to do. Suddenly, Liam was struck with a thought: “What If I learned to play the guitar?”
And with this, his artistic acoustics erupted.

“I got a cheap acoustic, and then, about a year later, I thought ‘let’s really do this thing,’” he said.

One simple thought brought on a rush of passion and creativity.

“It’s a way for me to connect with myself. I don’t wanna say meditation, but that’s basically what it was for me,” he said.

It’s a way to escape stress, a way to feel “in the moment” and connect to those around him.

For Liam, learning guitar was easy — just about four months. The strum of the strings, the rhythm of the music, it all made sense.

Scottie Frier, his guitar instructor, said that Liam picked it up pretty quickly.

“Certain kids when they are beginning are a little awkward,” Frier said. “Liam was kind of a natural.”
But the guitar was so much more than a lesson, a hobby for him. Liam said, “It kind of saved me. I was in a depressing stage,” he said. “Guitar brought me out of that.”

Liam found out about his love for guitar during his first show. Standing up on the stage with one of his friends, he felt right at home.

“I was playing lead guitar so I played a Pink Floyd song while my friend was also performing,” he said.

Liam’s latest debut was a concert, thrown for Scotty’s birthday at the Windjammer, a bar and restaurant on the beachfront.

With two guitar solos, Liam was the star of the show. This was his first of many shows that he would hope to follow, even looking for a career in music in the future.

But Liam’s skills don’t end with the strumming of the strings.

Liam is also an avid member of the sailing club, a club that tries to get out on the boughs and experience the sea.

“We usually try to sail around twice a week,” he said. “I don’t have my own boat, so it can be hard.”

Liam inherited this set of skills from his mom — an ex-employee of a boating company. There, he learned about a sailing camp — and from that, his excursions began.

“It’s a way to get away from people… and land,” he said. “Me and my friends posted on instagram because our team was down on members, and we got a lot of people to ask about it.” This is a common theme for Liam — doing what he’s passionate about seems to take away the stress of everyday life. Liam and his friends revived the surfing team, and brought back most of its members when it was struggling.

For Liam Marguglio, guitar — and sailing — are two ways to escape stress and also grow as a person. And with these talents, he wishes to sail the strings to a career in the future.