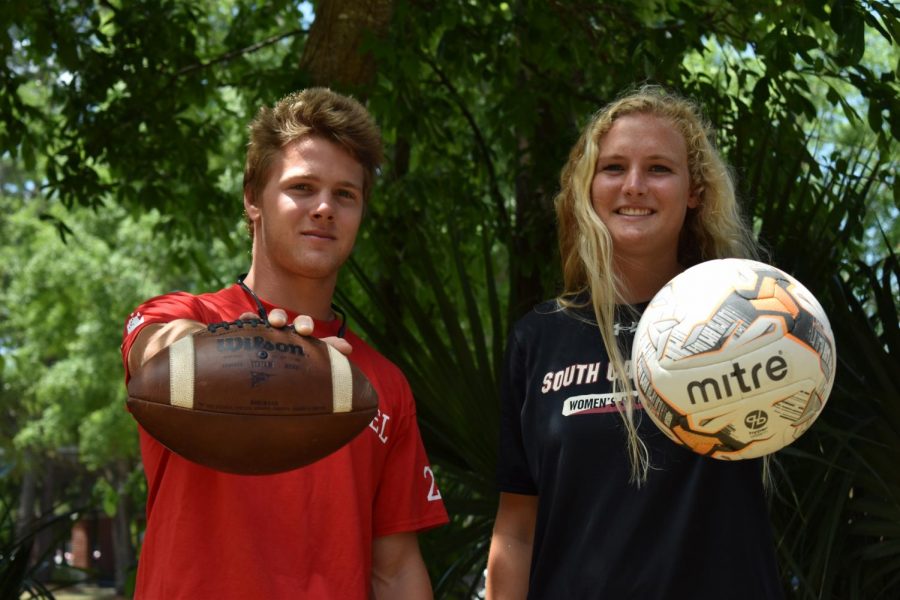 Sami and Huw Merideth hold a football and a soccer ball showing the unique sports they have mastered.

Seniors Sami and Huw Meredith have practically been raised by sports. It’s not just another passionate hobby for them, it’s a way of life.

It’s turned their relationship into a constant and competitive time, constantly trying to outmatch the other. But in doing so, they only hope to make the other better.

“We’re both really competitive. We try to help each other out, both competing at high level we both push each other to be better at what we do,” Huw said.

“We get along really well, and we always support each other and try to be encouraging.” Sami said.

Now, the two of them will be both being attending college on sports scholarships. Sami has signed with the University of South Carolina women’s soccer team and Huw will be playing football for The Citadel.

A competitive feeling, Sami said, is what really got her hooked into not just soccer, but sports in general.

“I guess I just noticed yeah, maybe I am better than some other kids and it was just fun,” Sami said. “I definitely love the competition, it gets you going, and it makes you passionate about the game.”

Huw, meanwhile, finds more than just competition in football. According to him, football has given him more than just a hobby, but also lessons he can apply to his own life.

“Man, it teaches you a lot of things. Football, it is a game, but it gives you life skills, builds character,” Huw said.

Huw’s career in football started with flag football, and he eventually played for Wando’s B team in seventh grade.

After a two year detour to Oceanside, Huw eventually returned to Wando, finishing his senior year here not just for football, but for some other career reasons too.

“I transferred to Oceanside at the end of my ninth grade year and played varsity football there for two years,” said Huw, who then returned to Wando. “Coach [Jimmy] Nunan, he’s a good guy. Also as well as the classes, I wanted engineering, Wando offers those type of classes for me to do.”

Sami and Huw’s mother, Vicki Meredith, said Sami started with soccer at the age of four, when her dad was coaching Huw’s soccer team when they played soccer together as little kids.

“She started playing at age 4, and her dad was coaching Huw’s team, and so he’d bring her out and throw her in the game with boys,” Mrs. Meredith said. “She’s played a long time.”

As Sami began to play more soccer and approach high school, her skill in the sport showed as she began playing on older teams, eventually arriving at Wando to play JV in eighth grade.

There is more to life for them than sports, though. As they head into college, they each have an idea of what they might want in the future.

“I’m thinking something in the medical field, I’m not really sure,” Sami said. “Maybe physical therapy cause I’ve played sports all my life. It’d be fun working with athletes.”

“I’ll do football and then probably am going to study mechanical engineering,” Sami said. “Guess we’ll see where that takes me, not sure yet.”