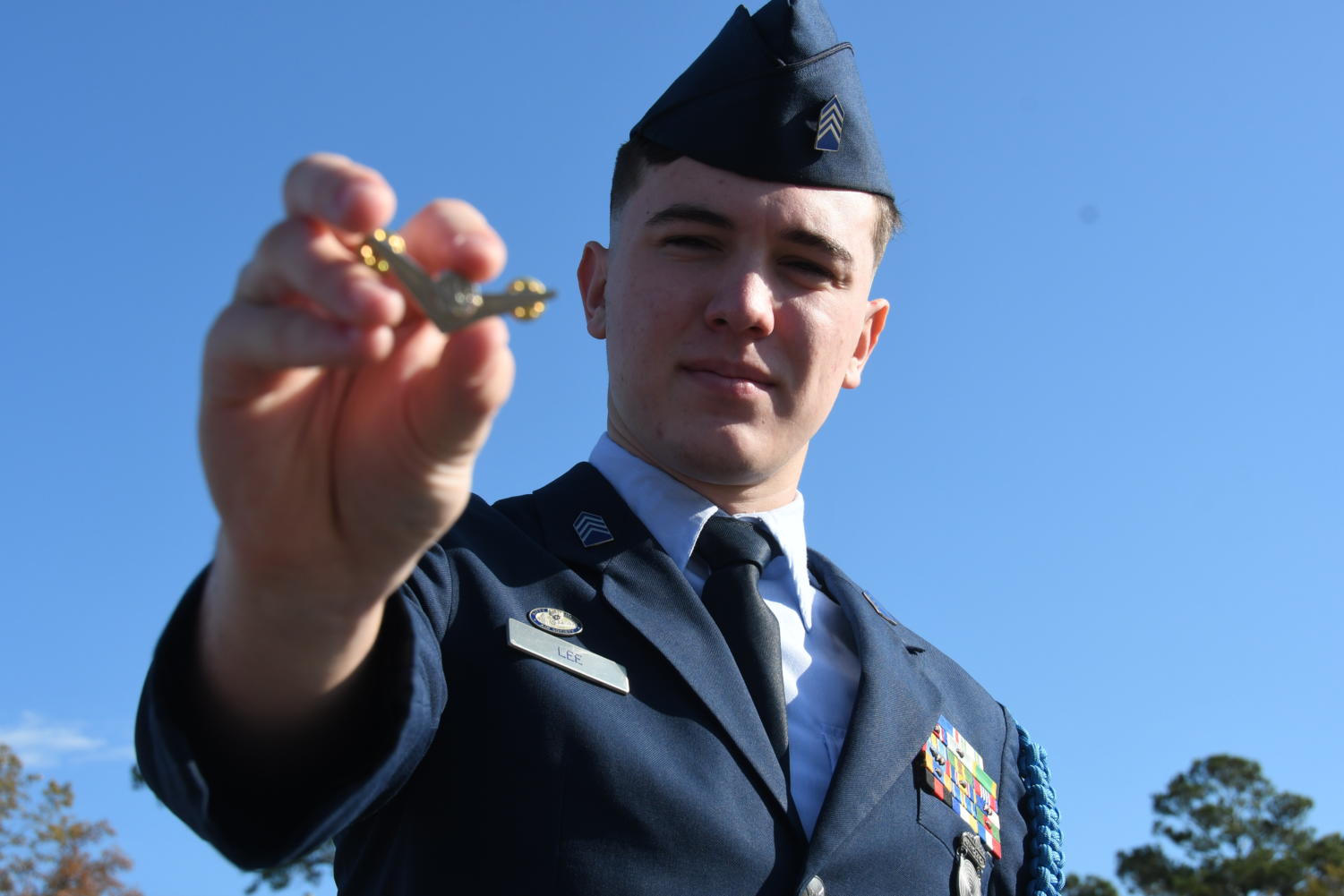 After being deeply inspired by his father, Grant Lee proudly holds up his wing pin that symbolize having a pilots license. (Kailey Foushee)

After being deeply inspired by his father, Grant Lee proudly holds up his wing pin that symbolize having a pilots license.

Senior ready for take off

Soaring high above the Charleston marshes and gently-curved rivers is senior Grant Lee, who received his private pilot license over the summer.

Lee has spent the majority of his life with the passion for aviation and his piloting career is just getting started.

His love for flying has grown with Lee as his family worked in aviation. His inspiration and motivation sparked in his early childhood as his father and uncle both worked as pilots and his grandfather also aspired to be one.

“My dad was a pilot for the Marine Corps, so I’ve grown up around aviation and airports all my life. My uncle was also a pilot and my Grandpa wanted to be a pilot, but it didn’t workout for him,” Lee said.

Surrounded by aviation and aeronautics at home, school, and airports has certainly been an advantage for Lee’s interests in flying.

“I’ve just [had] a long line of aviation in my family. My dad, he would show me the aircraft and there would be some aviation stuff. He also had a CFI which is a certified flying instructor so it would tell me some stuff,” Lee said.

Currently, Grant is a cadet in the Air Force Junior Reserve Officers Training Corps which is taught by former Air  Force pilot, John Farese. Farese teaches a variety of courses surrounding ground school at Wando for all grades.

“I teach exploration of space, I teach survival skills, and that’s Aerospace Science. Then I teach, for seniors, there’s a management course and then for juniors I teach a life skills course,” Farese said.

Farese’s previous career of flying for the Air Force provides him with the knowledge and experience to share with his students to inspire them to accomplish their career goals.

“I was an Air Force Pilot for 22 years and so after doing that this is [kind of] the next progression for me to kind of give back to kids,” Farese said.

Similarly to Lee, Farese also experienced the same early interest to pursue a career in aviation.

“ [Lee] voiced an opinion that he wanted to be an air force pilot. I was kind of the same age at 17,  that’s what I wanted to do. I was very fortunate to go to the Air Force academy and then go to pilot training and then fly for the Air Force,” Farese said.

The ground school program at Wando grants students the basic guide to first pass their ground school test and later achieve their private pilot license. It covers lessons in aerodynamics, photography, map making, and the weather for aspiring aviators.

To earn a private pilot license, one must need a minimum of 50 hours of flight time, be at least 17 years of age, and pass a flight test that is given. Once all is said and done, one could legally fly an aircraft. In aviation, a private pilot license is very common due to its benefits. It allows pilots to travel for pleasure in daylight or the night sky and fly in and out of civil airports around the world.  Nonetheless, Lee has spent a great deal of time and effort dedicated to flying.

“I have 70 hours in an airplane, over 200 landings, I earned a scholarship from the Air Force to go to Embry-Riddle,” Lee said.

Lee plans to continue his path on piloting by attending the Embry-Riddle Aeronautical University in Daytona, Florida. In fact, Lee earned a major scholarship to Embry-Riddle to access more in-depth education about aviation and aeronautics.

“Over the summer I earned my private pilot license over at Embry-Riddle down in Florida, so right now I am just keeping current, flying every month and then I plan on getting my Instrument Rating which is the next step in my pilot journey,” Lee said.

The Embry-Riddle Aeronautical University’s aviation program allows students and professionals from around the world to challenge their knowledge on all areas of aviation including safety, operations, and human factors. It allows students to achieve their dream careers and fill up the upcoming positions of commercial, military, or corporate piloting.

“Going through the course that he went through over the summer will give him a very strong foundation in four years from now to be able to go to pilot training and be successful,” Farese said.

As Lee embarks on journeys that guide him all around the world, the support system he has will always be home.

“He’s very conscientious, always has his assignments on time…it’s been fun having him as a student,” Fraser said.

Surrounded by aviation and aeronautics has kept Lee motivated to aim for his dream career of flying for the Air Force.