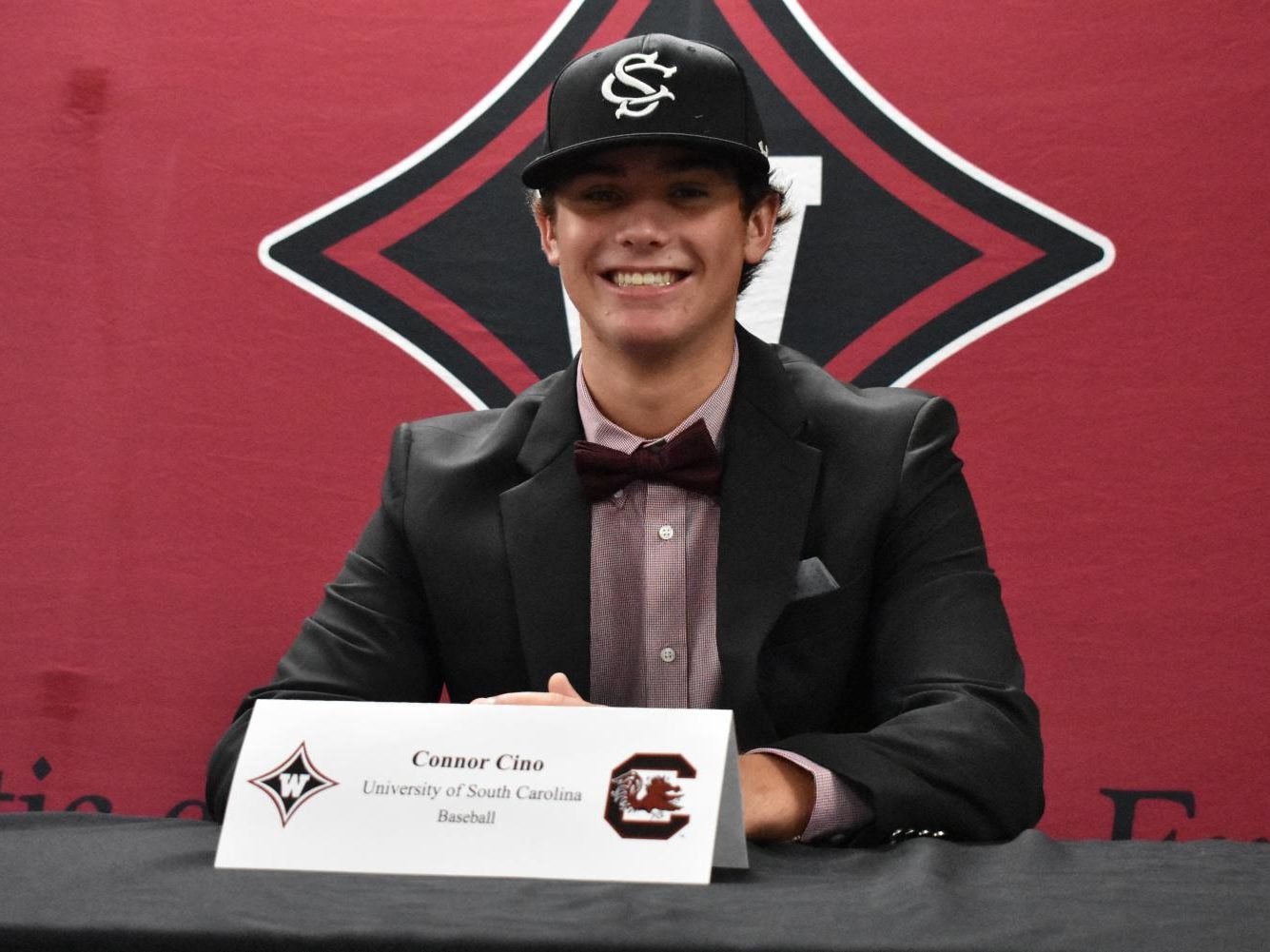 Athletes hear it constantly. All that hard work, that grind, that sweat. In the end, it pays.
For senior Connor Cino, despite the current pandemic, his lifelong commitment to baseball will come to fruition in the fall when he walks on at the University of South Carolina. Cino plays catcher and was recruited for his hitting ability. He said earning his place for Wando was one of his proudest moments.
“Coming here, no one knew who I was, no one knew if I was good at baseball. Coming here, having a starting spot as a sophomore, being a huge impact on the team, I was proud of that,” Cino said. “Just coming for nothing and making a name out of myself. It wasn’t my parents helping me, it was my parents’ name, it was my name.”
He was picked up by Coach Richard Couch of University of South Carolina after attending an elite showcase camp. He got a tour of the school and the chance to show them what he had.
“I did really well, talked to the coaches there a little bit and then then the next day they called me up,” said Cino, who led in all of the offensive stats last year for Wando.
Cino played both soccer and baseball up until freshman year. Before he started high school, his family moved to South Carolina from New Jersey. Cino picked baseball as his sport and started turning heads for Wando and his club baseball teams.
“It got to the point where I couldn’t do both sports, and I wanted to pick baseball over soccer, it was just something I wanted to keep doing,” he said. “I always played on the top teams I could possibly play on, and it just took off from there, and it’s just what I wanted to do.”
Prior to COVID-19 eliminating his chances at a senior season, Cino looked forward to his final season. Now he can only draw lessons from the situation.
“Our chemistry is insane, we are so much closer, and we’re playing for each other, and I feel like everyone is in a good mindset, and I’ve been doing my best to keep us together. This year is a different animal, it’s fun, it’s really fun,” he said.
Sports often teach values and virtues beyond the lines of the field. Cino felt baseball had gifted him lots of life advice and practice.
“Baseball is basically a game based on failure, so it really teaches how to deal with failure and not feel sorry for yourself, and how to move on from failure and how to better yourself,” Cino said. “It really teaches you not to give up on yourself and to not be selfish because at the end of the day the game is a team sport.”
The grind to reach the college level is often a taxing one. Cino said his experience was no exception.
“The whole commitment game, it’s a rollercoaster of emotions. There’s times where you think you’re not good enough to play college baseball, ‘cause baseball is a mental game, so you can get in your head a lot,” Cino said. “Finally reaching that point where you know, and other people know that you’re good enough to play at the level you’ve always believed you can play at, it just feels really good.”
Cino competed in the Little League World Series when he was young. He said it was a validating experience. His team lost in the semifinals and did not quite make it to Williamsport.
“I played in The Little League World Series when I was 12 years old, so that was a big moment for me, and I was the best kid on the team,” he said. “It made me feel pretty good, it was like damn, I’m pretty good at this.”

There’s times where you think you’re not good enough to play college baseball, ‘cause baseball is a mental game, so you can get in your head a lot”

Cino’s teammate and workout partner, junior outfielder and pitcher Marshall Witmer, got to learn from Cino’s experience both as a player and through his recruitment process. Witmer has played with him since his sophomore year.
“We’ve become pretty good friends,” Witmer said. “It’s been a cool bond to play with each other for that long.”
Witmer, who is also looking at collegiate baseball, has gotten to see Cino’s work ethic.
“We workout together a lot. We hit together and work together outside of school practice and everything, but yeah his [work ethic] is amazing. Anybody going to USC or one of those big schools or even college baseball in general has to have a huge work ethic and he’s got it,” Witmer said.
Witmer believes Cino’s strongest asset is at bat.
“He’s going to USC to be a hitter. It’s definitely the best part of his game, [his] hitting is just outstanding compared to everybody else,” Witmer said.
Every baseball fan knows the sound. The crack of the bat against the ball for a homer. It just sounds different.
“[Hitting a homerun] is indescribable. That’s one of the best feelings in the world. I don’t know how, you just do it, and you’re like I did it… You see that ball fly and when it’s a no doubter and you know, it’s like, I did that,” Cino said.
He said there are fewer things better than smashing the ball over the fences or just connecting really cleanly. One of those things is the camaraderie he shares with his teammates.
“When you’re on the baseball field, you have a different mindset, and you’re just trying to better each other. Say a teammate is having a bad day, multiple guys from our team will go up to him and make sure he’s okay, and talk to him, and just pick his brain, make him feel better. It’s constant, everyone does it. Our team is so close,” Cino said.
Cino worked outside of practice with hitting coaches and trainers to boost his potential. He trains in the batting cages along with workouts.
Jeff Cino, Connor’s father who was available for a phone interview, said his son was working out at the time of the call. He said Connor was not the most naturally athletic kid on the roster, but his work ethic had always made him stand out.
“There’s a lot of athletes you see that are just God-given, good athletes, just genetically gifted, Connor has never been that kid,” Mr. Cino said. “He’s always been the kid that’s worked harder than everybody… He’d be the kid that would have catching lessons two or three times a week, batting lessons two or three times a week.”
That extra time in the gym has given Cino noticeable power from the plate. The University of South Carolina lacks power batting coming off the left side. Mr Cino said that was one of the big reasons they picked him up.
“When Connor went to the USC workout, and we went there very humbly, he just had a tremendous workout. He hit like two or three home runs,” Mr. Cino said. “They liked his power and that’s the reason why the coach called him.”
He gave major credit to two individuals who helped Connor succeed on the baseball field.
“There’s two people I guess that were really fundamental in Connor’s recruitment. Tory Tyson, who is someone who’s worked with Connor. He’s a baseball guy and they worked together and Tory’s a good mentor to him,” Mr. Cino said. “[Assistant Summerville Baseball Coach] Alan Bridges and [his son] Sawyer have a lot of connections to USC.”
Jeff Cino felt proud of his son’s achievements both on and off the baseball field. Connor will be receiving scholarship money for academic merit, not athletic performance.
“Connor, financially, was well compensated from an academic perspective at USC, which is most important to us, that his grades get him the dollars,” Mr. Cino said.
He too was frustrated that his son and his teammates didn’t get the opportunity to play like anticipated this year. His wife gets to spend most of her time watching Connor play high school ball. They were both upset to miss the chance to watch her son compete for Wando for a full last season.
“It’s tough to lose a whole season… the team was just a good team of boys and parents. I thought it was going to be something really special, so it’s a real bummer,” Mr. Cino said.
The pandemic also impacted the summer training for the Gamecocks.
“Traditionally what they would do is the kids would report in June, take a couple of classes and train, which is not going to happen this year,” Mr. Cino said. “Traditionally after your senior year you’d take the summer off… but this year the coaches want to see the boys get their reps in, so they’ll be playing some summer ball.”
Before the quarantine, Cino was batting with college kids and playing as much as he could. Now he bats with some friends and a few college players while he tries to get back in the swing of things as the situation continues to develop.
In the end, Mr. Cino was happy that his son’s hard work had paid off into the option at collegiate level athletics for a division one school.
“Connor, we got him in the right place, and then he started building relationships with the right people and they got to see him play,” Mr. Cino. “Obviously you gotta be able to do something for them to support you.”