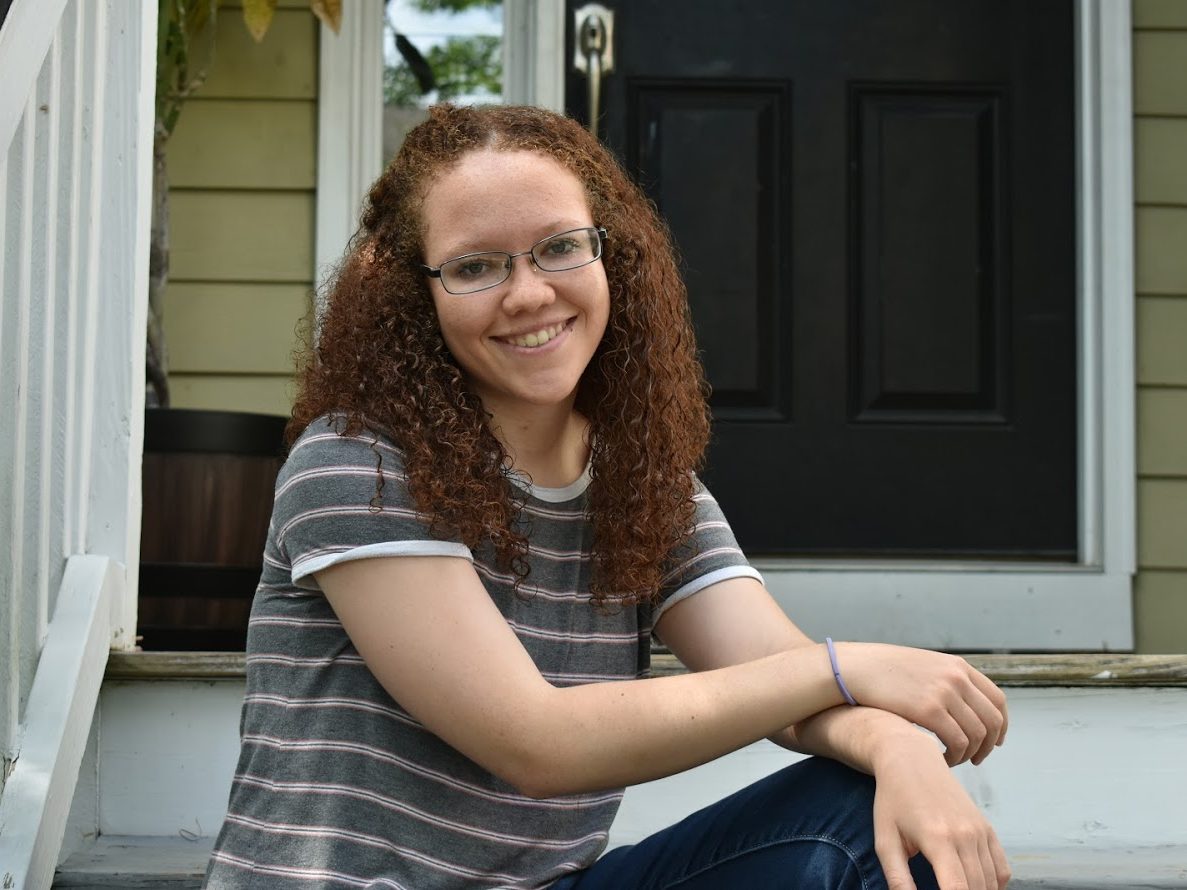 Zoe Hagedon sits on her porch.

In 10 years, she dreams of being in Los Angeles. Acting in Hollywood, or maybe writing and selling her art. Living out her dream of being creative in the big city.

Senior Zoe Hagedon has always been creative in one way or another. For the past three years, she’s been planning to write her own supernatural trilogy. She draws inspiration from other books and dreams up her own ideas to combine into a fantastical story of self discovery.

When she’s not working on her novel, she’s writing a script with her dad about a murder mystery and the discovery of dark secrets within a small coastal town.

“I like writing in general,” Hagedon said. “I’m always coming up with new story ideas like every day and it just popped into my head to be honest… it just…came to me like we were on a walk one day, just around the neighborhood and it popped into my head and I was like. ‘Oh we should write about this’ and we kind of expanded on the idea.”

The pair have already planned out three seasons and are almost finished writing the first episode. Despite the long process of registering the script with Writers Guild of America, analyzing the score marketability, hiring readers, getting an agent for submission, eventually getting it on IMdB, and then trying to sell it — Hagedon and her dad are committed to seeing where this journey will take them.

“We are currently writing a script and we are hoping eventually that, yeah, we can get it on to Netflix or something like that,” Hagedon said. “We’re almost down with our first episode and we have three seasons planned out right now.”

Hagedon has been taking theatre classes since she was a kid and has always dreamed of being a film actor in Los Angeles.

“Since I was 12, I’ve been taking theatre classes at the schools I’ve gone to,” Hagedon said, “and since I’m a writer, I’ve always like wanted to be in the stories that I’ve written so I think just being called to adventure and everything like that. I think pretending to be other people would be pretty cool.”

Not only is she a lover of the dramatic arts, Hagedon also speaks up against the problems of society like the prejudices of racism.

“I’m mixed and my brother is also mixed,” Hagedon said, “but he has dark skin, so we’ve been treated differently because of our skin colors before… Racism, it applies to everyone. It’s not just black people, black people do get it a lot more than other people, but it applies to everybody just hating on somebody else because of their culture, where they come from — I think that’s wrong.”

She also uses her experience with being adopted and having friends who have been or are actively a part of the foster system to speak out against the faults within the system.

“I just wanted to spread awareness on what’s wrong about the system so people would try to reach out and help these kids because a lot of people, if they see something wrong they don’t do anything about it because they don’t have to and I think that’s messed up,” Hagedon said.

“I’m adopted, so I could have easily been put in the system and I wasn’t. I was lucky and I want to help kids that weren’t. They’ve all gone through something that’s like horrific or messed up and I wanted to be their voice because I know it’s not easy for everyone to talk about what they go through, but I wanted to generally talk about as a whole, what’s wrong with it, so I could help kids like them.”

She’s even thought about combining her two passions and using them to help advocate these topics.

“I have thought about making films to spread awareness on sensitive topics, like the foster system because I think that would be a fun and creative way to do that and it would be easier to get out there,” Hagedon said.

Hagedon plans to attend the New York Conservatory for Dramatic Arts and hopefully pursue a career in either film acting or writing.