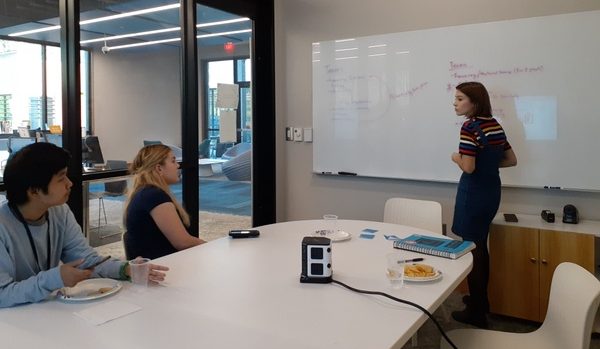 Senior Louanne Murphy leads a team meeting discussing the design of their prototype.

Shooting for the stars

The chophouse is already filling up and for most students, the night will consist of watching football and socializing with friends. But one person is missing from the stands, senior Louanne Murphy. This time is essential, so she is completely focused.

And there is work to be done.

Back in January, NASA announced a design competition called the NASA Wears Challenge. High school and middle school students from across the country would build teams to design either headgear or a multipurpose garment to mitigate against radiation exposure. Final designs would be considered for astronauts’ use in the event of a solar particle event.

Murphy and her friend came across the competition while scrolling through Instagram.

“We were just jokingly talking about it like, oh this would be cool, and then I said “woah, why not. Why don’t we just do it?” Murphy said.

A few days passed and Murphy had put together a ten person Wando team, with each member assigned to a different task. Skills in 3D modeling, clothing design, radiation calculating and different facets of engineering were considered. After completing numerous engineering and computer science classes, Murphy was highly qualified to serve as Team Leader.

“I pretty much organized everything and found roles, led meetings, pretty much made sure everyone was doing what they were supposed to be doing,” Murphy said.

The team had been formed, and it was on to phase one. Here, teams would choose to construct a headgear piece or a multipurpose garment. The Wando team decided to design headgear by using 3D modeling and different materials to mitigate against radiation.

After weeks of calculations and numerous models, the first deadline was close in sight. But something was wrong. 3D printing was not working and time was running out.

“We had to go completely back to the start and figure out a completely new plan, revisit the craft store to try and find stuff,” Murphy said.

The group was able to rethink their design and submit in time for the deadline. Out of 78 teams, 15 were selected to move on to phase two. Out of the few groups, Wando proceeded.

It was March now, and phase two was underway. Teams needed to construct prototypes of their models along with a proposal video to present their products. Two weeks into March, the Coronavirus pandemic led to the closing of all public schools, putting a roadblock in the NASA competition.

“When everything went virtual, it was hard to…have clear communication between everyone….NASA was also trying to figure out how everything was gonna change,” Murphy said.

Deadlines were shifted, and teams had to quickly adjust to the strange circumstances. Murphy’s teammates were having to meet from home without a steady internet connection. Someone needed to make the prototype, and Murphy took it upon herself to fill the role.

“I ended up using craft foam that people use for cosplaying, and I ended up kind of following patterns for what people would use to make cosplay helmets and then like tweaking it to make it fit our helmet design.” Murphy said.

The headgear was sealed with metallic glue and then garnished with a finishing layer of white and garnet paint. To be sealed from radiation, the team utilized polyethylene material and adjusted the thickness to fit weight constraints. Numerous calculations were made to ensure a balance between safe radiation protection and a steady, wearable weight.

Soon enough, the prototype had been finished and the video proposal was submitted. Only five of fifteen teams would advance, so competition was tight. The Wando team ended up pulling through and moving to the final phase, which is currently in progress.

Murphy and her teammates have been working on a design presentation that will be presented virtually to a panel of judges on October 30th.

Murphy gained leadership skills from the competition that she previously did not know she was capable of.

“I had never tried to lead a team. I was always really shy and kept to myself before I did this…this kind of made me realize like hey, this is something I really like doing. I like leading a team. I like all of the organization that goes behind it,” Murphy said.

Through all of the team’s hard work, Murphy feels nothing but positivity about the experience.

“None of us had ever really done anything like this because it was completely student led…I got to meet a great group of people, made some new friends. It was great,” she said.