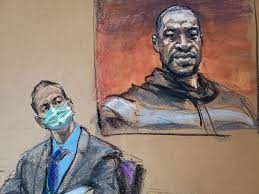 The murder trial of George Floyd

At 46 years old, George Floyd–a Black man–was killed by a white police officer in Minneapolis, Minnesota while being arrested for allegedly using a counterfeit bill. This happened on May 20, 2020. Less than one year later, the trial to determine the fate of the police officer, 45-year-old Derek Chauvin, who knelt on Floyd’s neck for over 9 minutes, began in March 2021.

Deciding the trial were 12 jurors, along with 2 alternates, who remained anonymous throughout the televised event. Derek Chauvin’s lawyer was Eric J. Nelson, and Prosecutor Jerry Blackwell, was the Flyod family’s lead attorney on the case defending the late George Floyd.

Nelson went first, arguing that Chauvan was innocent due to the fact that he was just doing what he was trained to do as an officer of the law. His main argument was that there was more to the death of George Floyd then what happened in those nine minutes.

“His case is clearly more than about nine minutes and 29 seconds,” Nelson repeatedly said.

Blackwell followed Nelson with his own opening statement, claiming that Chauvin is guilty without a shadow of a doubt as the evidence would prove. He stated that Chauvin broke the oath he swore to uphold as a police officer and exerted unnecessary, excessive force which led to Floyd’s death.

The next three weeks were dedicated to testimonies. 45 witnesses, police force experts, medical professionals, and others who could add to the evidence for either side, testified. These were only the a few of the people who could have been called to the stand, not including the 400 other witnesses they could have called in if need be.

Many bystanders and witnesses stated that they regret that they couldn’t do more, noting how they heard Floyd cry out multiple times, saying that he couldn’t breathe. They noted how many people attempted to intervene, telling the officers to stop, or calling the police to send help.

Nelson crossed examined the witnesses, asking them questions about what they saw, how they would feel in a similar situation–attempting to create a reasonable doubt within the jury, questioning if Chauvin did what anyone would do in that given situation.

Medical professionals were asked what they found during and after the event. Paramedics described what they saw arriving on the scene, how they responded to the situation and what happened upon the arrival at the hospital. The paramedics noted how Floyd appeared non-responsive on arrival to the scene, and that even after Chauvin was told to stop kneeling on Floyd and that he did not have a pulse, Chauvin refused and continued to restrain the man. Once Floyd was loaded into the ambulance, paramedics attempted to resuscitate him, but his pulse never returned.

Multiple other medical personnel testified in regards to the cause of Floyd’s death. Dr. Martin Tobin, a physician in pulmonology and critical care, concluded that Floyd died from a low level of oxygen that caused damage to his brain, and ultimately caused his heart to stop. Daniel Isenschmid, a forensic toxicologist, said that Floyd’s blood showed that it was extremely unlikely his death stemmed from the low levels of norfentanyl, an opioid, which was found in his system at the time of his death.

Dr. David Fowler, a former chief medical examiner, testified that Floyd died due to cardiac arrest combined with the drugs in his system, not from a lack of oxygen.

Police and police training experts were also put on the stand. Head of the homicide unit of the Minneapolis police force, Lieutenant Richard Zimmerman testified that once an officer has placed the suspect in handcuffs, they should adjust their force as necessary. In Chauvin’s case, Zimmerman said that kneeling on the neck of a handcuffed suspect was never part of his training, and is considered a deadly use of force. On the other hand, Barry Brodd–a use of force expert and retired police officer–attested that Chauvin was justified and reasonable in the decisions he made regarding his use of force.

Floyd’s girlfriend testified as well, noting Floyd’s struggle with opioids and the fact that she had suspected he had started using again in the days leading up to his death. She mentioned how he would sometimes buy drugs from Morries Hall and Shawanda Hill, both of whom were in Floyd’s car on the day of his death. Both Hall and Hill were on the witness list, but Hall invoked his 5th Amendment Right not to testify. Hill, on the other hand, testified and confirmed the fact that the $20 bill that Floyd had used the day of his arrest was indeed a counterfeit.

Both Nelson and Blackwell questioned each witness and professional, attempting to sway the jury to make the right decision regarding the guilt or innocence of Chauvin.

After all of the testimonies were presented, the lawyers solidified and summarized their case with closing statements.

On April 19, Nelson began his closing statement by thanking the members of the jury for their attention and dedication to the trial.

He spoke to the jury’s understanding of doing what is necessary in the moment, falling back on training and past experiences, and asked them to consider the reasonableness of Chauvin’s decision in the moment.

He looked at the 9 minutes and 28 seconds in a different context than Blackwell had put it in. He described the necessity of officers’ fluidity in situations, and noted the importance of being ready for anything because at any moment the entire situation can completely change. He made the argument that the trial, and the decision that the jury would make, should consider more than what just happened in those 9 minutes and 28 seconds. It should consider everything that happened leading up to that moment as well.

Nelson laid out the evidence, reminded the jury of the testimonies and asked them to understand Chauvin’s situation and decisions, and think about his training, the moments leading up to the event, and analyze the reasonableness of his actions.

Next, prosecution attorney Steve Schleicher gave his closing statement. He began by describing George Floyd’s life. His childhood, his relationships, and the events of his death. He attempted to humanize Floyd and his life for the jury as much as possible.

“Just a human, just a man, lying on the pavement being pressed upon, desperately crying out. A grown man, crying out for his mother. A human being,” Schleicher said.

Schleicher once again reiterated how Floyd’s last words were to the officer kneeling on his body as he pleaded for help, stating how he couldn’t breathe numerous times. Schleicher said that Chauvin broke his oath to serve and protect by using unnecessary and deadly force in Floyd’s arrest. Schleicher reminds the jury of the witnesses and experts who testified, stating how Floyd’s death was caused by Chauvin.

Overall, Schleicher argued that ample evidence and expert and witness testimonies proved that Chauvin did not uphold his oath as a police officer, and in 9 minutes and 28 seconds, caused the death of George Floyd.

Finally, on April 20, 2021, after discussion of 10 hours over a course of two days, the jury had made their decision and presented it to the court. Derek Chauvin was found guilty on all accounts of unintentional second-degree murder, third-degree murder and second-degree manslaughter.