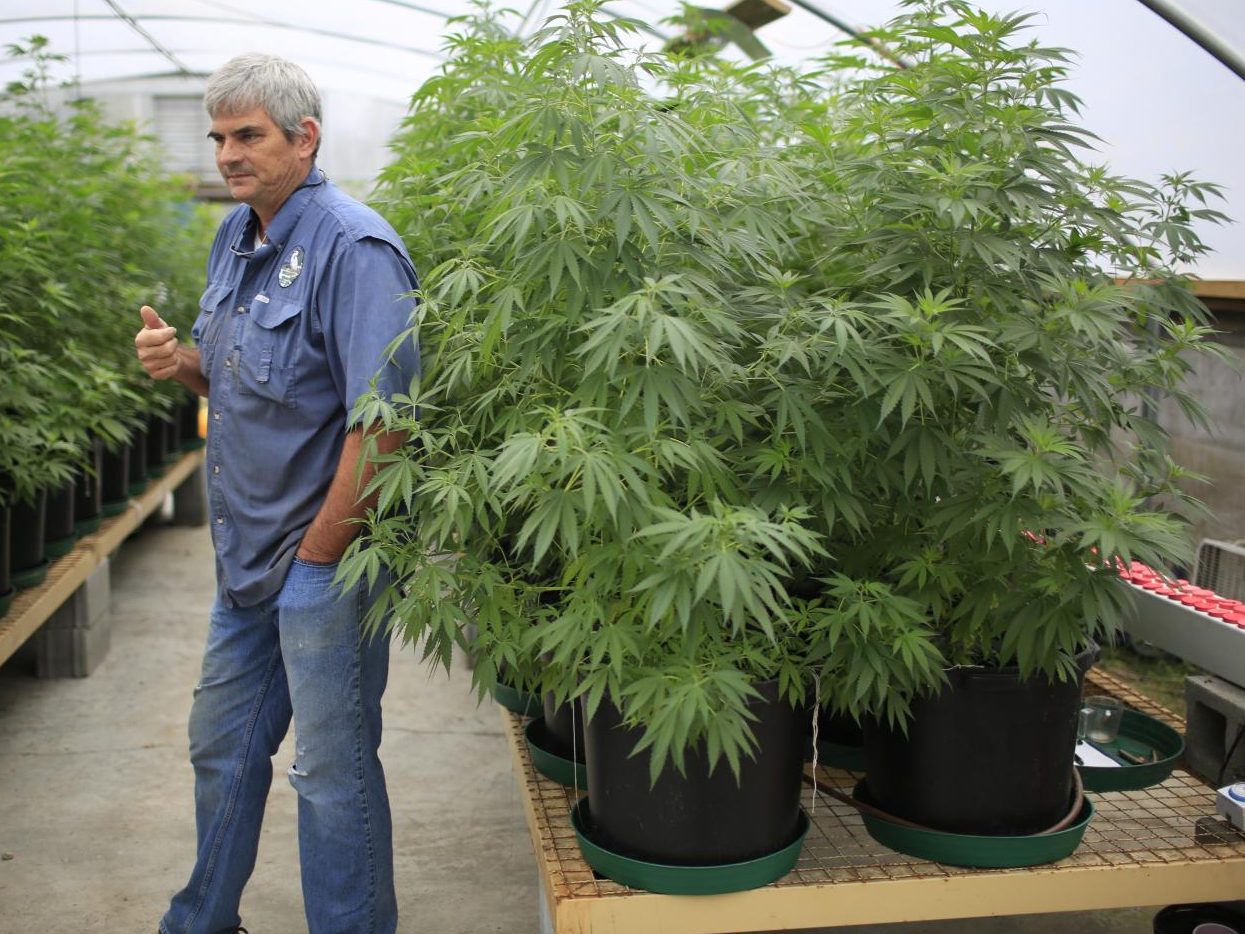 The rise of cannabidiol

Six drops under the tongue before school, six drops before bed. Almost instantly, senior Skylar McGinnis feels calm, like a weight is lifted off her shoulders.

After struggling with anxiety-related panic attacks and sleeping issues for two to three years, McGinnis asked her mom, Traci McGinnis, if it was time for her to get on medication, like Prozac. Ms. McGinnis did some research because the thought of medication treating McGinnis’s anxiety scared her — based on some of her friend’s past experiences — she said.

“While I know that those types of drugs are important and help lots and lots of people,” Ms. McGinnis said, “I was a fan of trying something else first to see if there was a more natural option… It’s just another thing to try before trying prescription drugs.”

After doing some more research on CBD, Ms. McGinnis offered to take Skylar to Eucalyptus Wellness Company to see if CBD — cannabidiol — oils would work.

CBD is an element found in hemp plants. People smoke it, vape it, drop it under the tongue and use it cosmetically — but it is not weed and has no high effect. The use of CBD products and the growth of the hemp plant has become widely popularized in recent years, spurring controversy if it should be legal or what regulations should be applied with lawmakers, consumers and planters, while still not universally FDA-approved.

After her mom recommended it and she consulted with her therapist, McGinnis realized that CBD could be her solution. The oil that McGinnis has been using for a little over a year now contains CBD tastes and smells like “grass” but helps her carry through her day without added stress and anxiety, she said.

“[CBD] is not the answer for everybody,” Ms. McGinnis said. “We both started taking it at the same time because we were both dealing with similar issues… It’s not a magical pill. I think it’s a combination of the CBD oil, continuing to eat right, continuing to go to therapy… It took the edge off.”

While McGinnis has been juggling her AP classes, college applications and student council, CBD has been helpful to reduce added stress in her academic life, she said, but she doesn’t rely on the product to get her through the day.

“Even when I’m not taking CBD oil because I notice myself getting better, I have no withdrawal effects because it is not something you can get addicted to,” McGinnis said. “I genuinely see no bad side to it… I hope it becomes more normalized.”

The Birth of an Industry

In January 2018, the farming, distribution and sale (to persons at least 18 years old) of hemp in the form of CBD became legal in South Carolina and spawned an expansion of the industry in the state. After the legalization of CBD, the first 20 farmers were given permits in the state, including Charleton Hemp Company, a hemp farm located in Ridgeville.

Now, 114 growers are permitted in SC for the 2019 season, according to the South Carolina Department of Agriculture.

Charleston Hemp began Jan. 12, 2018 as a nursery — just doing growth. As business started revving up, the company expanded, and now it operates on a 250-acre property, according to Malia Young-Williams in public outreach for the company.

“We grow, extract and produce” for multiple farms in the state as well as their own hemp growth at Charleston Hemp, Young-Willaims said. “There are not many extraction facilities in the state, and we are not only available to our own hemp, but we have ourself available to other farmers… We are kind of like a co-op in a way, so growth with other farmers and doing it all together has really made us expand as quickly as we have.”

Not only has the supply for the product drastically expanded in the state, but so has the demand. As well as people looking for hemp products in gas stations in the area, stores specifically selling CBD — like CBD Social on King Street which aims to “reduce narcotic use,” according to its website — are trying to keep up with the increasing demand.

This includes students like McGinnis, who are able to use CBD to alleviate anxiety or seizures — people 17 and under can legally use CBD if a parent buys the product, Young-Williams said. It is also recommended to talk to a medical professional or therapist before starting use.

“[CBD] was definitely a trending topic when it first got onto the scene,” Young-Williams said. “And with it, a lot of people were confused or really didn’t know what it was, or thought it was a drug because it’s coming from a plant that is so closely related to cannabis.”

CBD is the sister plant to marijuana, Young-Williams said, but it does not produce that high. According to state law, all growers in South Carolina must maintain at most a 0.3% THC level in their hemp plant to remain in business. THC is the chemical in hemp that makes the high effect when using mariuajana, while CBD is the chemical that relieves stress and acts as an anti-inflammatory, said Dr. Mark Hamann, Chair of Drug Discovery and Biomedical Sciences at the MUSC College of Pharmacy.

Hamann works with Charleston Hemp Company by testing each product, making sure they are viable with THC content under 0.3%. This testing is required by S.C. law for hemp growers to get testing done by a third party academic group to offer a Certificates of Analysis for their products, Hamman said.

The way Charleston Hemp maintains its THC levels is by using all female plants to make sure the THC content is low enough. If the female is pollinated by a male hemp plant, it can “literally destroy the CBD content,” Young-Williams said.

One state farmer was charged with unlawful cultivation of hemp based on the 2019 Hemp Farming Act. Because of a mapping error, plants were being grown outside of the farmer’s licensed farmland. He was arrested in September and his CBD plants mowed down, Bulick said.

This becomes an issue when the pollinating plants from his farm — which the location was unknown to other growers — could potentially infiltrate other hemp farms without those permitted growers knowing, Young-Williams said.

CBD and the Body

The growth, distribution and sale of CBD has strict regulation from the S.C. Hemp Farming Act to ensure what is sold is actually CBD and that consumers realize low health risks when they use the product, according to Hamann.

“The cannabinoids… are not required for nutrition like proteins or fats or carbohydrates are, and they are not vitamins, from a regulatory standpoint they are supplements,” Hamann said. “They are drug-related molecules.”

CBD, to be specific, has anti-inflammatory elements, benefitting users with arthritis, and it has shown benefits in users with epilepsy and ADHD as well, Hamann said.

“Your body is equipped with an endocannabinoid system,” Young-Williams said. “You have C1 and C2 receptors in you body… You know, our bodies are made for it.”

When CBD is used, it enters the bloodstream and is in turn broken down by these receptors — Cb1 and Cb2 — which occur naturally in the body to break down the cannabinoid, according to the Department of Biomedical Sciences, Institute of Medical Sciences, Foresterhill, UK.

The ways CBD is used can determine the level of risk on the body, Hamann said.

“The benefit of the cannabinoids — at least when they are used orally or topically — is that they have a fairly low amount of risk,” Hamann said. “They are not the most potent or aggressive or effective drugs on the market necessarily, but… now because the opioid epidemic, and that it’s claiming 60,000 American lives every year due to opioid addiction, there is clearly a need for better treatments.”

But there are risks.

Vaping CBD puts the user at high risk for drug-related illness and death. Vaping, in general, has caused 39 deaths as of Nov. 5 and over 2,000 cases nationwide for vaping-related illness — 79% of whom are under the age of 35, according to the CDC. This puts CBD vape-ers at an even higher risk for health issues with continual use of the product.

“The cannabinoids are actually also very similar to pine resins which are used as varnishes or coatings, so you could effectively dissolve the cannabinoids in a solvent,” Hamann said. “The challenge is a material like that is not really suitable for inhalation… They are a very viscous oil that can polymerize and harden which means they can physically form barriers in your lungs which makes it difficult to breathe.”

Growth in the Future

Grocery stores and gas stations are now selling CBD products, which also poses an authenticity risk, according to Young-Williams.

“And that always scares me too because when you see some of these places that have it like gas stations, and if you read the bottle, you don’t always know where you are getting it from. You don’t know where that’s really coming from,” Young-Williams said. “Nothing is FDA approved. The only drug that is FDA approved is Epidiolex, and that is made specifically for seizures.” Young-Williams sees the industry having a “bright future,” but the rapid rate of CBD’s expansion can be alarming.

From 20 to 114 licensed growers in under two years since SC’s legalization, the CBD industry is here, and it’s growing.

“This has only been since 2018,” Young-Williams said. “It hasn’t even been that long since hemp has been legal in growth, but you’ve already seen — around the nation — how having [CBD] legal, being able to grow, has changed a lot of people’s mentalities, going more holistic, using alternative medications, just how it helps.”