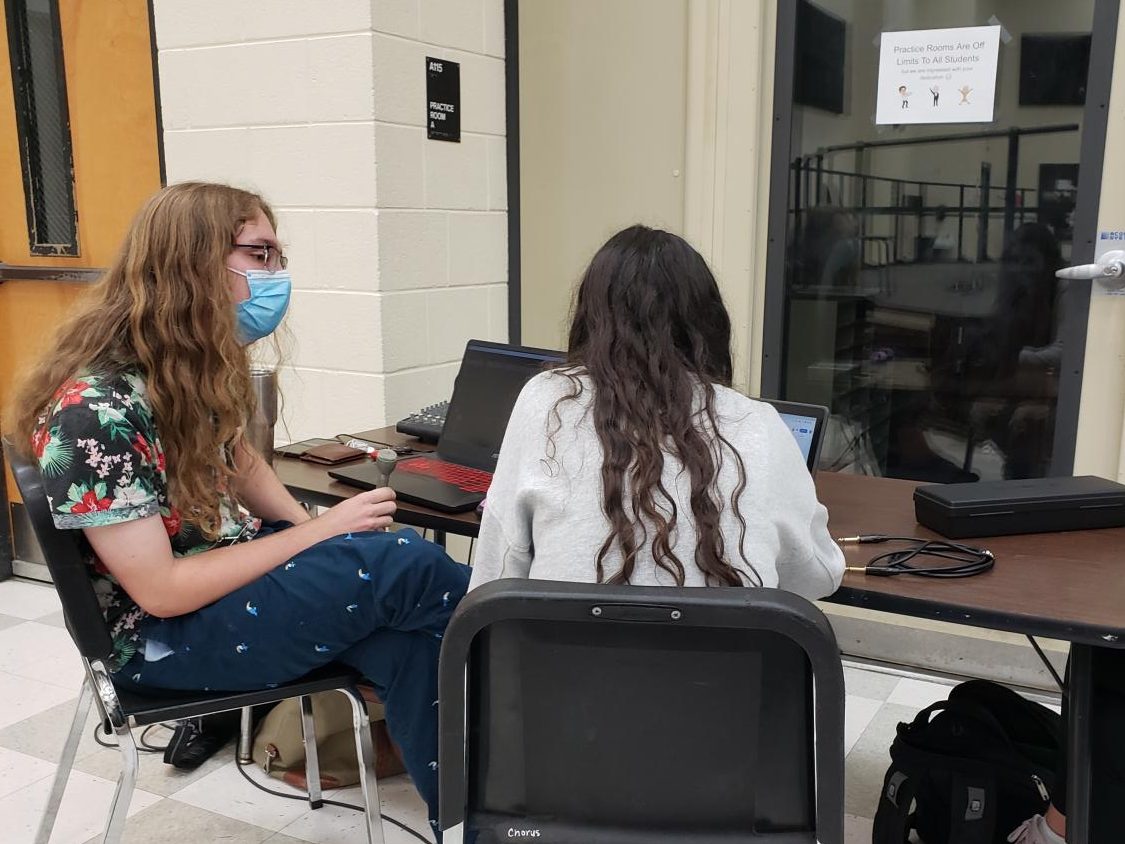 Theatre sets up for their next performance. (Emily Coker)

Theatre sets up for their next performance.

The state of theatre amid Covid-19 panic

The doors remain locked and the seats sit empty.  The curtains pulled and the stage is weightless. Wando’s Performing Arts Center sat dark and abandoned when COVID-19 hit –an abyss from March until October, when the Honors Ensemble worked through the precautions in order to open back up the doors.

Having to adapt is an understatement for the Wando Honors Ensemble. Senior Christopher Warzynski working alongside senior Rowland Marshall and junior Jenna Pace, are working together, directing the show Dracula — their job consists of controlling the sounds and taking care of any other technical aspects of the show. As well as these tasks, the three of them must navigate them all under districtwide COVID restrictions.

This year, the Honors ensemble is presenting Dracula as a radio play and One StopLight Town as a movie production. With all of the restrictions due to COVID-19, both works will be available on demand two weeks prior to their primer.

“Dracula is a direct adaptation of Orson Welles’ novel. We get to record with one person every rehearsal. Everything is sanitized. Everything is spatialized. It is very hard to get the acting and all of the emotional stuff out of there when we have all of these precautions,” Warzynski said.

Despite the current challenges with remaining safe and attempting the normalcy of rehearsal, the Honors Ensemble has found a new way to collaborate. While students work with one another through a computer screen and others present their lines through a mask, this year has definitely taken a different approach to preparing for the shows. The restrictions with in-person practices have posed a new challenge for these productions.

After years of training in theatre, students had to disregard their past ways of acting and develop a new technique to work during these crucial times. Instead of movement and interaction with one another, actors are forced to use their imagination.

“I think COVID has made them better. It has made everyone a little bit maybe some more emotional guard and shield. But once we are able to get in their head and once they are able to get out of their head, they haven’t been acting in so long that there is so much raw energy and talent that just comes out immediately once you break the shell,” Warzynski said.

With a face mask and glass surrounding the actors, it is difficult to feel a connection with the character and fellow crew members. However, these restrictions with COVID-19 have led to something bigger for future theatre.

“Even though I am a senior and I will be getting out of Wando theatre, the idea of doing more radio plays and different styles of theatre that isn’t just live for the audience should be kept. I think a lot of young actors don’t get the ability and the opportunity to do something that we were forced into,” Warzynski said.

With the second show, One Stoplight Town, the pressure and the expectations are higher as they participate in the South Carolina Theatre Association High School Festival. Although this may be an annual event, this year has led to a different take on the competition, considering it will be hosted virtually.

This film is being directed by Ms. Destini Fleming and seniors Lucy Oxford and Ella White. Being used to only live productions, filming has opened a whole new world for theatre productions. This has made collarbations key.

“We are working with students from ECSN from formally Tribe Talk. They have been able to come over and help us with filming,” Fleming explained.

To include the whole cast while following social distancing protocols, the movie is going to be filmed with one character in the lens acting and saying their lines as another actor is in the distance reciting their lines. With a large amount of editing and technical work to the film, characters will be placed side by side in the movie, almost like a Zoom meeting.

COVID-19 has created many challenges for the Honors Ensemble; however, nothing can stand in the way of their perseverance and creativity.

“But you have to be like Michelangelo, you have to chisel these people out of their shell, once you get that, boom, you are good to go,” Warzynski said.