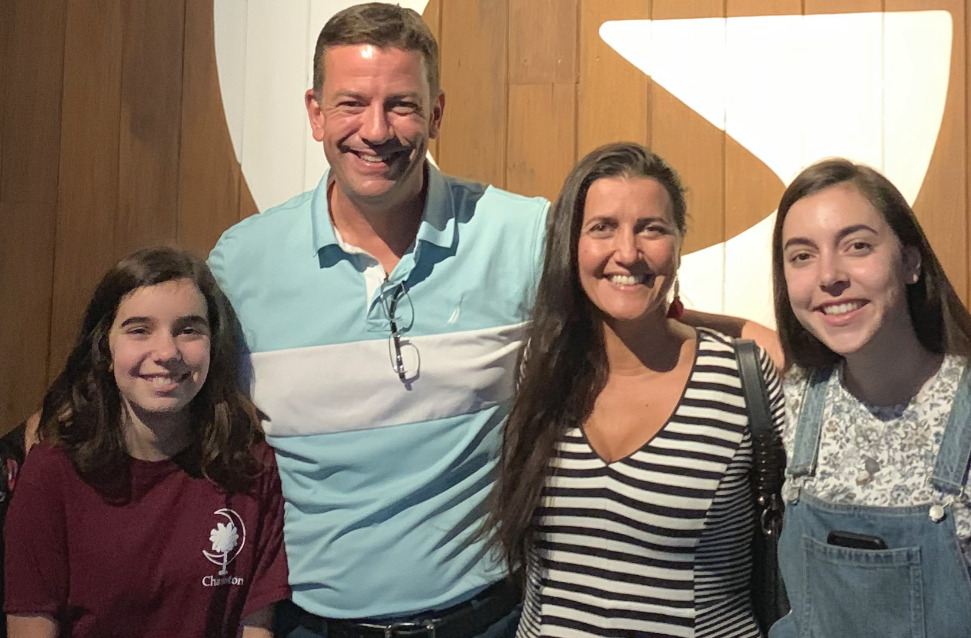 Cunha and her family (provided by Estefania Cunha)

Cunha and her family

She laid in bed staring at the wall. Hours passed, but she stayed in the same place. The isolation of the third floor was the only place she could be. All she could do now was wait. The first week of quarantine was over and her breathing had returned to normal, but she knew she still had a long way to go. There was a knock on the door, signaling it was dinner time. She opened it to find a nice, warm meal made by her husband waiting for her. She couldn’t wait to recover, to be able to see her family again and to go outside. She couldn’t wait to return to a normal life.

When Spanish teacher Estefania Cunha contracted coronavirus, her world had been turned upside down. She traded in her classroom for the isolation of her house, and she traded in her family life for a long two weeks alone in quarantine.

“I started to feel like I had a bad cold like the flu. I think that was probably towards the third week of March,” Cunha said. “I was in pretty bad shape at that time. I had a fever but not very high, but I was so tired and my head hurt so bad that I couldn’t function properly. I had to drag myself out of bed to start lesson plans, and after a couple hours of trying to do lesson plans and answering a few emails, I had to sleep for the whole day.”

After researching her symptoms, Cunha was afraid that she might have contracted coronavirus, so she decided to take extra precautions and get tested at the MUSC testing center in West Ashley.

“They swab you and you go through the drive thru. Everybody is wearing those hazard suits. You feel like you’re in those movies with zombie apocalypses,” Cunha said. “That’s what it felt like. It’s really strange and then it took a little while to get the results. I think towards the end of March maybe the 24 is when they called me and said I was positive.”

Once she tested positive, the rest of Cunha’s immediate family had to be tested as well. Her two daughters tested negative, but her husband tested positive. Her husband, however, had much milder symptoms and didn’t seem to be sick.

“I was very careful. It smelled like bleach all over this house, and I stayed away in the third floor by myself,” Cunha said.

Despite testing positive, Cunha’s condition was not severe enough for her to be hospitalized. MUSC checked in on Cunha a few days after the test to make sure her condition was staying stable and to collect her symptoms for the CDC’s database. One of her worst symptoms was extreme chest tightness.

“My chest was really heavy like it was a little scary because I would go to bed and I would say, ‘Can I breathe?’ You doubt yourself because you hear all those cases that you see on TV that are the worst cases, and I kept thinking ‘I wonder if I can breathe well? Can I breathe ok?’” Cunha said.

“It dragged on so long for me that you get to a point where you’re in tears because you miss your kids and school, you miss your daily life, so it makes you really realize that you take things for granted like just to go to a restaurant and sit down and to be with your friends,” Cunha said. “Allso it’s scary that I had something that could have killed me.”

Cunha’s experience with the virus lasted for three weeks. While the first and second weeks were tough, her symptoms started to fade by the third week. She was able to slowly return to a normal life by cleaning her house and walking her dog. However, she made sure to continue to take precaution for the safety of herself and those around her.

Now that Cunha has recovered, she has been working towards creating a new normal while everyone is stuck at home.

“I try to have a routine for everybody. We get up and pretend it’s a school day then we take a break for lunch and then we ride bikes. It’s better than the quarantine, at least I get to go outside,” she said. “I get to see my kids. I get to cook. I get to resume a few things, but it’s not going to be normal I guess for a while especially with my senior here. You guys can’t have graduation… and we had to cancel our trip to Portugal in June too.”

The Cunha family’s experience with the coronavirus changed everyone’s outlook on life. They learned how easy it was to take things as basic as wellbeing and daily routines for granted.

“It was an experience where everyone at home took a step back and said, ‘Wow.’ It’s hopefully a lesson learned,” Cunha said.