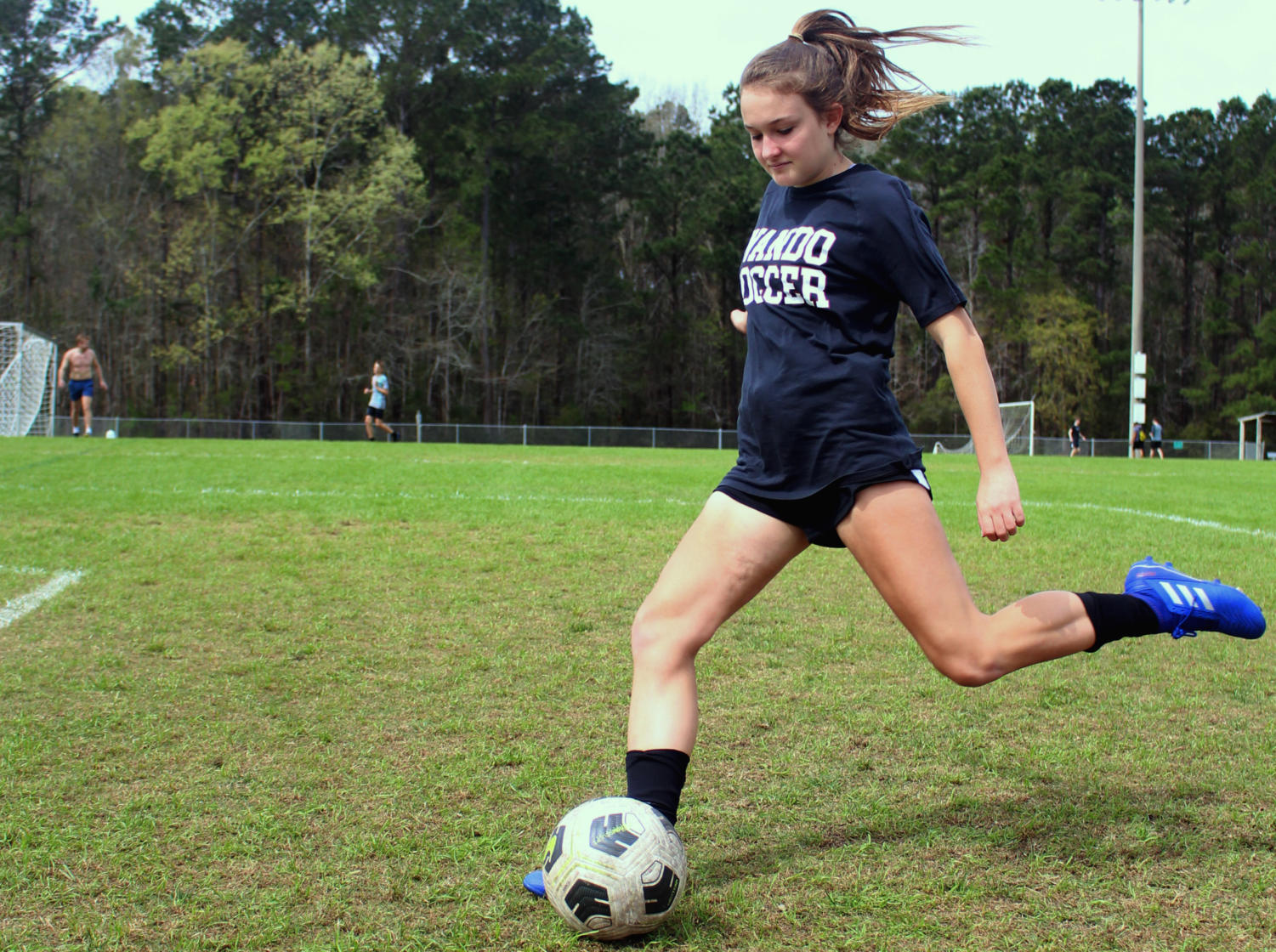 Sophomore Ansley Douty practices soccer on a beautiful day, which is one of her favorite activites. She focuses then kicks the ball into the goal flawlessly. (Scarlett Lewis)

Sophomore Ansley Douty practices soccer on a beautiful day, which is one of her favorite activites. She focuses then kicks the ball into the goal flawlessly.

On April 24, 1996, the WNBA, or Women’s National Basketball Association, was founded and approved by the NBA board of governors. This league proved to be a step in the right direction for female athletes around the world.

The debate over the gender pay gap in sports has been ignited in recent years, in addition to the lack of attention that women’s sports are getting, not just at the professional level but also at the prep level.

In some scenarios, many people believe that women’s sports are overlooked, even though they share some of the same competitive attributes as men’s sports. There are different reasons that people believe this such as the lack of viewers that they obtain.

Sophomore Wando Varsity soccer player Ansley Douty has been playing soccer since she was five years old and is hoping to lead her team to another state championship this year.

“As a society, we have improved tremendously as time passes. However, I think small changes, such as ones at Wando High School to emphasize women’s sports more, could lead us in a huge step in the right direction,” Douty said.

She believes that the world has made strides over the past few years in recognizing the accomplishments that women have made in sports. However, she also thinks that Wando can make some changes in the way that they promote women’s sports teams during their seasons.

As a society, we have improved tremendously as time passes. However, I think small changes, such as ones at Wando High School to emphasize women’s sports more, could lead us in a huge step in the right direction”

“I think that some things that Wando can do that would help change some of these differences or just improve Wando athletes as a whole are announcing all sports events that are taking place that day on the morning announcements,” Douty said. “Another way to get more students out at every game supporting the school is making admission to Wando students free or supplying a certain number of free tickets for Wando students each game.”

Douty opined that if Wando raised a little more awareness for women’s sports teams, it would not only help raise school awareness, but it would help the school sell more tickets and make more money off of sports games.

Shannon Champ, the Wando Varsity Soccer head coach, has been coaching soccer at Wando since 2006 and has coached high school soccer since 1996.

When it comes to the differences between men’s and women’s sports at Wando, Champ believes there are not many between the teams.

“[Wando] provides tons of opportunities for athletics here at Wando on both the female side and the male side, I would say that the facilities are comparable for both programs… I don’t see much discrepancy as far as our offerings and athletics for male and female sports,” Champ said.

Overall, Champ thinks that Wando does a good job of providing equal opportunities for men’s and women’s teams, whether it is the practice facilities, the scheduling of games, or the school awareness for every sport.

Champ believes that Wando should have all of its sports teams gather and explain to other people why their sport is unique and why students at Wando should consider playing it, in hopes that this could help recruit athletes to play sports, bond male and female teams together, and raise awareness for every team’s games.

“My ideas would be along the lines of having an athletics day, where we not only honor athletes but do some kind of clinic or opportunity such as a carousel which would provide opportunities for the student bodies to come into the gym or out to the stadium and visit each and every sport that is represented and get to know the people in those programs and that would allow for those students that are interested in our sports here to see precisely what opportunities are at Wando,” Champ said.

Globally, women’s sports have come a long way in the past few years. Whether that is by recognition or an increase in viewers, the teams are gaining respect amongst the world.

However, there is still a long journey ahead. Fighting for equal salaries or adding different female sports to expand colleges’ options are some of the next battles to be fought.

“I think it has improved on all levels, starting professionally in the Olympics, we have added the WNBA, we have added professional soccer for women. I think we still have some room to go but I’d like to see the continuation of the trend where it’s more balanced as far as recognition on male and female sports,” Champ said.