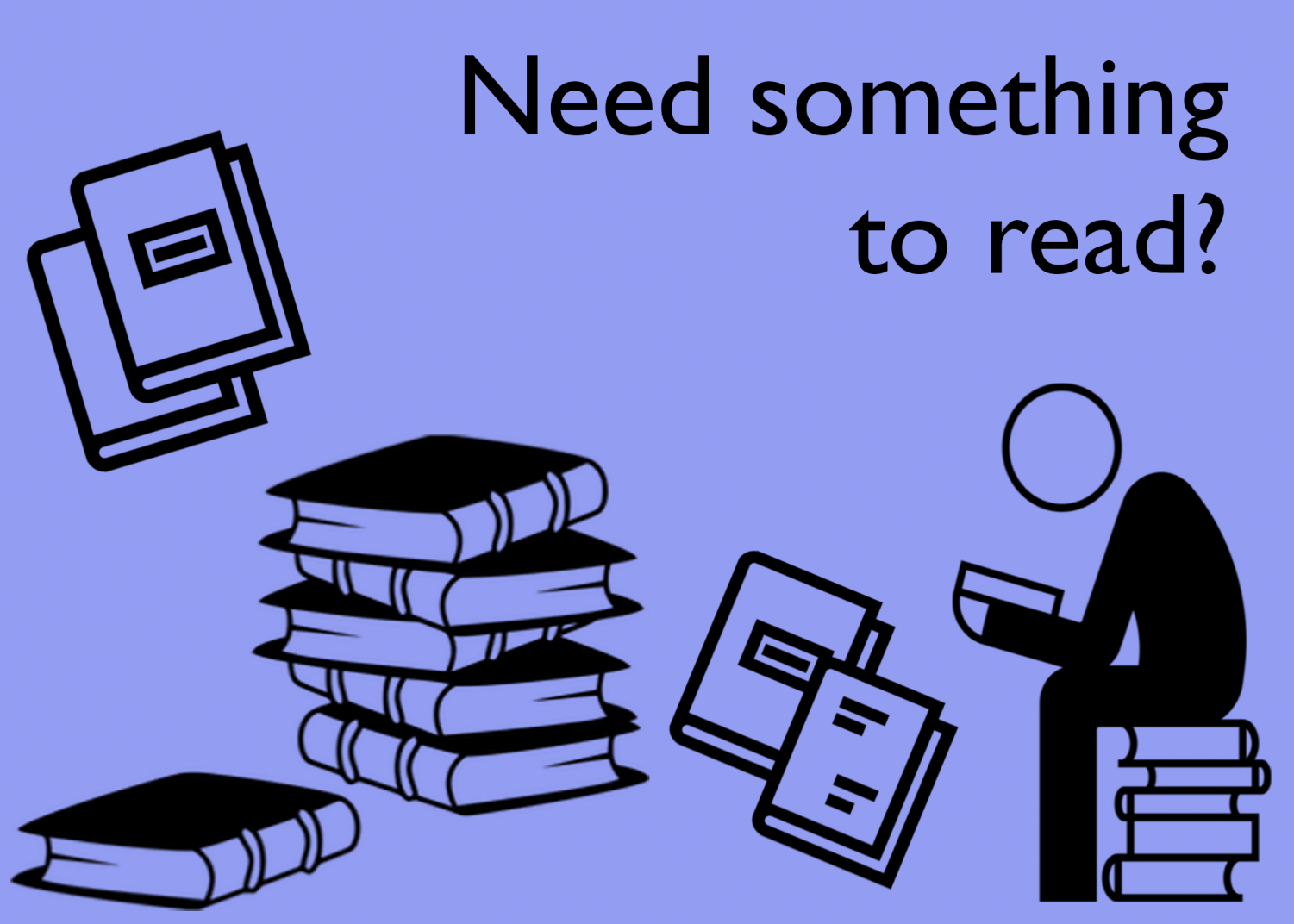 Books to read during quarantine

Co-Writing Editor Rosemary Delamater and staff writer Alli Ryan discuss which books they find are must-reads during the stay at home order due to COVID-19.

My top books picks to read during quarantine

With all this time stuck at home, you might be getting desperate for things to do. You’ve binge-watched Netflix, cleaned your room, and spent waaay too much time with your family. So even if you’re not much of a reader, you might find it worthwhile to take a look at some of my top picks for books to read.

I avoided this book for a while because I was wary of the premise. In a utopian society, nobody dies of natural causes, so instead they die at the hands of “scythes” — people trained to kill people. But after picking it up over the break, I found that I enjoyed it more than I thought I would. It was fast-paced and well written, making it hard to put down. But it also pushed me to think in a way that I usually avoid, and that made it all the more impressive to me.

The Hitchhiker’s Guide to the Galaxy by Douglas Adams

Have you ever looked into where the “42” meme came from? Here you go! That’s not why I put this book on the list, though… It’s here because although it’s somewhat old, it’s hilarious. There are actually six of these, all pretty short, though like many other series, the first is indisputably the best. The combination of satire and sheer inanity is a great way to escape your thoughts and laugh.

Everything, Everything by Nicola Yoon

This romance novel features Madeline Whittier, a girl who can’t step foot outside of her house because of her incredibly weak immune system — sounds strikingly familiar, doesn’t it? This already heartwarming story will hold extra meaning, now that Madeline’s character just became a lot more relatable in recent weeks. And besides that, the writing pulls you in and the format is engaging. Once you start reading, you won’t want to stop.

Where the Crawdads Sing by Delia Owens

It’s a murder mystery — but more importantly, a love story. Between a girl and a boy, yes, but also between a girl and the marsh. This book will encourage you to think and give you an appreciation for the coast, where it takes place. The writing is beautiful, and the plot will keep you guessing right up until the final chapter.

The Tattooist of Auschwitz by Heather Morris

As frustrating and boring as staying at home all day is, this is one of those books that reminds you it could always be worse. Based on a true story, this book takes you through several aspects of the Holocaust, including many that don’t usually come up in school. This book is naturally very dark at times, but it also includes moments of hope and selflessness. And I was glad to find that unlike many stories of its kind, this book had a happy ending.

Dystopian novels to read during quarantine

I can’t speak for everyone, but quarantine is driving me insane. Reading has been one of the only things keeping me calm through this stressful time and is a way for me to take my mind off the world around me.

Dystopia has been one of my favorite genres for a while. I find the storylines so entertaining and the books always keep me at the edge of my seat.  I have compiled a list of seven amazing dystopian novels to read during quarantine to help make this time a little easier.

The first novel in a six-book installment, Shatter Me follows a girl named Juillet whose touch can kill and is locked away for murder. In a world that’s falling apart, where most people live in fear, the reestablishment, a government organization, says it’s the only hope. But is the government lying? Maybe Juillet is meant to do more than sit in a prison cell. If you are looking for a book that has a unique plot and characters you fall in love with, this book is for you. With Mafi’s beautiful deep writing and plot twist after plot twist, the book will keep you reading and knock you right off your seat.

The Book of Ivy mixes alliances, betrayal and love in a society that was split apart by two families who fought to control the ruins of one country. In order to keep peace, the losing family’s daughters are married to the winning family’s sons. But when Ivy Westfall is married to Bishop, the president’s son, peace is that last thing on her mind. She has one mission: to kill him. This book is a great read and makes you question everything you thought about sacrifice. If you like books that have two strong lead characters and involve trust and betrayal, this book is for you. Ivy Westfall is one of my favorite protagonists and will without a doubt make you laugh and cry multiple times.

Aria has lived inside the dome of reverie her entire life — a man-made dome used for protection against the wastelands. Her friends, job and life are all there. But when Aria’s mom goes missing, she knows she has to take her chances in the dangerous outside wasteland. Although when she meets Perry, who is also looking for someone, her hope spikes in finding her mom. But there is one problem: Perry’s a wild, someone who lives outside the dome, and can’t be trusted. Or so she thinks. This novel has a great storyline and will keep you turning the page. If you like books about corrupt government or romance, Under the Never Sky has a great balance between the two.

If you need a unique storyline that fascinates you, Reboot is exactly what you need to read. In this novel zombies aren’t real but Reboots are, and they are an essential part of society. Reboots are someone who died and came back to life. The longer they are dead, the stronger and faster they are, and the less emotion they have when they wake up. Wren Connolly was dead for 178 minutes and is one of the strongest reboots there is. She is also the best soldier there is, obedient and loyal to the HARC. But while training new reboots, Wren meets Callum, who was only dead for 22 minutes and is partially human. But something about the weak reboot intrigues Wren, but if she steps out of line she is as good as dead. But maybe rebelling is exactly what she needs. This book was so creatively written and showed the importance of emotion and acting off of them. Humor is also sprinkled throughout the book and it perfectly balances the mood.

If you love a good plot twist this book is made for you. The Muder Complex is a book full of coincidences, or is it? In a society where the death rate is higher than the birth rate, no one is safe. Meadow Woodson is no exception, and she knows that. It’s why her father taught her to fight and kill. One day she meets Zephyr James, who is a programmed assassin for the murder complex, the organizstion who runs their society. But Zephyr doesn’t know what he is and as secrets unfold, they start to think if their meeting was coincidence or fate. This novel has such a big plot twist in it that it pained me to stop reading. Meadow is such a strong antagonist, and I also enjoy a novel with a fierce female lead.

This novel is one of the first dystopian books I read and sparked my interest in the genre. It follows a girl named Ruby, who like millions of other kids was infected with a mysterious disease when she was younger. Only some died of the disease, while others came out with frightening abilities, and Ruby was one of them. Her abilities get her sent to a rehabilitation camp like thousands of others. But after one chaotic night, Ruby escapes and finds a team of others like her. They make a journey to East River, a safe haven. But as they arrive, nothing is what the thought it was, and they are left with more questions than answers. This book was beautiful and put me through an emotional roller coaster. Alexandra Bracken brings a sense of realism into this book which left me feeling unsettled in the best way and is something not many authors can do well.

This novel takes place in a world where love is considered a disease and everyone must get a procedure called the cure when they turn 18 to prevent the “disease.” Lena Haloway couldn’t be happier to get the procedure done — anything so she doesn’t make the same mistake her mother did. But when Lena meets Alex, who lives in the wilds, a place that isn’t under the government’s control, Lena starts to question what she once thought. Delirium covers a concept I had never read about before and shows a whole new meaning to love. Lauren Oliver seamlessly combines romance and dystopia into a book that is very beautifully written.

It’s entirely possible that you did not already have an emergency stockpile of unread books before the COVID-19 panic started, like I did. If that’s the case, fear not! There are still plenty of ways to get your hands on new reading material.