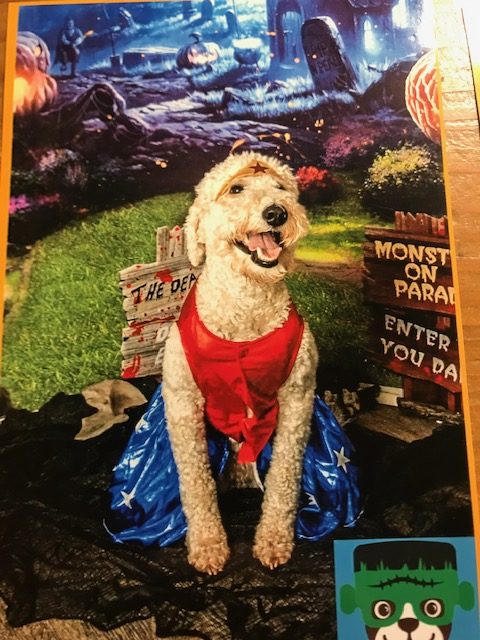 It was a secret operative mission. One that started with a long drive to Atlanta and ended with a new Goldendoodle puppy.

One and a half years ago, AP teacher Wiley Flanagin traveled to Atlanta, Georgia from Charleston to buy a Goldendoodle puppy without the permission of his wife – — and without telling his kids.

The name of this surprise puppy: Cheesecake.

“My wife loves this show called ”The Golden Girls” and the Golden Girls always eat cheesecake. We have this clue game… that’s Golden Girls oriented…so that our daughters who are five and seven can play,” he said. “When I brought the dog in and I told them it was a Goldendoodle, they were like ‘oh like The Golden Girls we can name her Cheesecake’.”

His family knew he was going on an errand to get a surprise to bring back. But they didn’t know that errand was a puppy — a puppy that Flanagin had always wanted. The kids enjoyed the present. His wife, on the other hand, wasn’t as happy — which meant Flanagin was left with the responsibility of the young dog.

“Me and Cheesecake are homies, we do everything together,” he said. “I did all the potty training, the waking up with her, the feeding her, the vets. It was all my responsibility because you know, I didn’t really ask.”

It was something he was willing to do, and he and Cheesecake became a close pair. Whether it be going to stores or parks, or riding in the front seat next to him, Flanagin said she is the type of dog that loves everyone and shows her affection constantly. Cheesecake even gives hugs, standing up on her hind legs and adjusting her head to snuggle in close with you.

“Cheesecake is secretly the love of my life,” Flanagin said.

But he also has another animal in his house, Chirpers, a 19-year-old blind cat. Chirpers is a rescue his wife found in the Virginia mountains. The name was decided because she chirps like a bird, she doesn’t meow like a cat. But Flanagin and the cat don’t hold a strong relationship

“She only loves my wife really and uses me for things like food,”  Flanagin said, “but I don’t have to deal with her on a daily basis.” .

But Chirpers has a special, yet sad feature to her, her tail is curved like one of a pig’s. The cause — six doors and one window. She has broken her tail seven times. The first six were from being in between the door and a human, and the seventh was from a window falling onto her tail. Flanagin believes that must be a record.

Flanagin loves both of his animals — he loves Chirper’s independence and he loves Cheesecake’s unconditional love. You could say that his secret operative mission was a success after all.

One Response to “The real teacher’s pet: Wiley Flanagin”